On 6 February 2012, a Mid-Air Nightmare happened when Indian Air Force An-32 K-3060 comes into land. The crew realizes that the left main wheel failed to descend.

In the video a person can be heard saying that the doors of the left main wheel are only partially open and the wheels are a unable to deploy.

Subsequently one can see the aircraft carrying out a slow approach and touching down on the runway on just the right wheel.

The Flight Lieutenant successfully managed to bring the aircraft to a stop even as it embarked on the left due to the missing wheel.

Flight Lieutenant Kharche was awarded a Shaurya Chakra in August 2012 for this stunning landing. 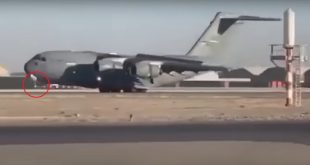 A screenshot from the video showing the mishap in Kandahar. (Image credit: Youtube video posted …