The interesting video in this post features F-35 demo pilot Capt. Kristin “Beo” Wolfe explaining one of her favorite maneuvers, the “I-to-I” or “Inverted-to-Inverted Pass.”

Upside down at 300 feet above ground level? Crazy…

Aerobatic maneuvers are flight paths putting aircraft in unusual attitudes, in air shows, dogfights or competition aerobatics. Aerobatics can be performed by a single aircraft or in formation with several others.

Nearly all aircraft are capable of performing aerobatics maneuvers of some kind, although it may not be legal or safe to do so in certain aircraft.

Here is the video:

Capt. Wolfe was publicly introduced as the new F-35A Lightning II Demonstration Team pilot on Feb. 29, 2020 after being certified to fly the demo profile during the annual Heritage Flight Conference held at Davis-Monthan Air Force Base, Ariz.

With over 800 flight hours in both the F-22 Raptor and the F-35A Lightning II, Beo is a combat veteran pilot from the 388th FW. She’ll be “sending it” for the next two years, showcasing the world’s most advanced fighter jet to people across the world.

The F-35 Demo Team also performs with the Air Force Heritage Flight Foundation to showcase the past, present and future of American airpower by flying in formation with World War II, Korean, and Vietnam-era aircraft. 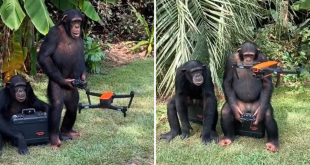 In a new short video that has surfaced on TikTok, apes have been spotted flying …