According to China Daily, Chinese J-15 fighter jets have started take-off and landing training on the new aircraft carrier “Shandong”.

The J-15s, also know as Flying Shark fighters, make its debut operational mission on the second aircraft carrier and the first such ship wholly designed and built in China.

Carrying the hull designation number 17, CNS Shandong is the largest, mightiest and most sophisticated naval ship ever developed and built in China.

The aircraft carrier’s design is largely based on China’s first carrier Liaoning, which was itself built from the partially-complete hull of the Soviet Kuznetsov-class aircraft carrier Varyag.

It retains the ski-jump takeoff, which limits its air wing to helicopters and Shenyang J-15 fighter jets of the People’s Liberation Army Navy Air Force, and the ship is powered by conventional oil-fired boilers driving eight steam turbines derived from the Soviet-designed examples installed on Liaoning.

As to J-15, this is twin-jet, all-weather, carrier-based fighter aircraft in development by the Shenyang Aircraft Corporation and the 601 Institute for the Chinese People’s Liberation Army Navy’s aircraft carriers. It is developed from J-11B as well as from studying of a prototype of Su-33. 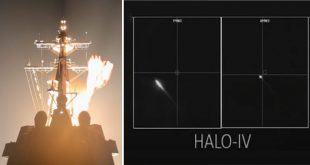