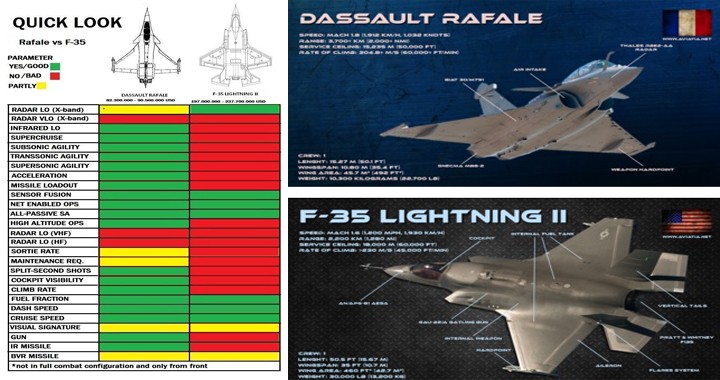 American F35 and French Rafale are two of the best fighter jets in the world. Both jets need to fulfill multiple roles in multiple services. This includes air superiority, ground attack, and reconnaissance.

Despite their similar goals, these aircraft are extremely different, not only in design but in their construction and the very philosophy behind them.

Today we will compare these two phenomenal fighter jets in this hypothetical match-up, and determine which fighter jet is better in a real battlefield.

Related link: Why Rafale is a better choice for India than F-35 – F-35 vs Rafale

Imagine, if you will, a single fighter aircraft. That fighter aircraft needs to fulfill multiple roles, in multiple services. This includes, but not limited to, air-superiority, ground attack, and reconnaissance. This fighter must also have a carrier variant. This single fighter type will make up the majority of the fighter fleet and must serve as a tireless workhorse.

these two fighters represent that ideal. Both the F-35 and the Rafale epitomize the “multirole” fighter type. These aircraft are true “jack-of-all-trades”. The Joint Strike Fighter takes things a couple of steps further by adding stealth and a STOVL variant, both of which have proven to be controversial additions.

Despite their similar design goals, these aircraft are extremely different. Not only in design but their construction and the very philosophy behind them. The F-35 is a multinational effort with investors (and potential buyers) from all over the world. Parts from the F-35 will be built all over the globe. This was done as a deliberate attempt to lower costs and promote investment in the programme.

In contrast, the Rafale was designed and built in France. All of its various component systems, including engines, radar, sensors, EW suite, and most of its weapons are all sourced from France. This was done as a deliberate attempt to keep French defense and aerospace firms on the cutting edge.