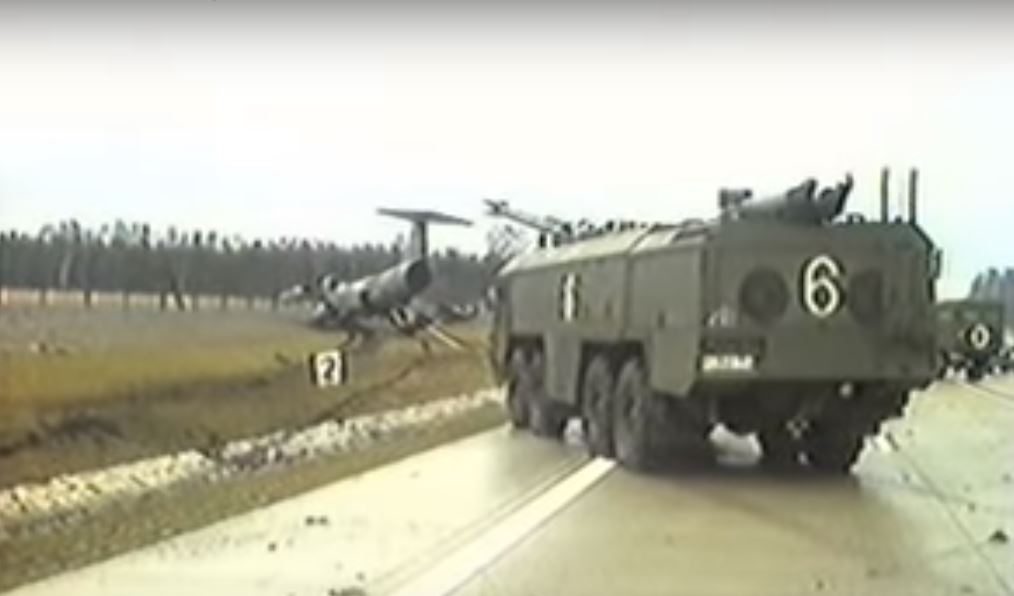 The Cold War Footage below, filmed in March 1984, during exercise “Highway ’84”, is particularly interesting as it shows an aircraft rarely seen operating from public roads: an F-104G Starfighter of the German Air Force (Luftwaffe) in “heavy” (tip + pylon tanks) configuration.

The video shows the F-104G “23+30”, belonging to JBG34 based at Memmingen Air Base, performing its usual high-speed landing [for more on landing the F-104 read this recent post], on Autobahn A 29 between Ahlhorn and Groβenkneten and ending its landing roll in the grass, with a collapsed nosewheel, on Mar. 29, 1984.

After WWII and through the Cold War some countries (especially in eastern Europe) developed the concept of highway strips: a section of a highway, motorway or other form of public road used as backup runway for military aircraft (mainly, light jets with STOL – Short Take Off and Landing – capabilities).

The purpose of these highway strips was to get rid off one of the basic drawbacks of combat planes – runway dependency. In fact, airstrips were not secret, neither in the West nor in Soviet Russia: they would be targeted and possibly destroyed at the beginning of any conventional or nuclear conflict, making alternate ways to launch and recover jets.

The German Autobahn, designed in the 1920s and 30s, had sections that could be used as runways by tactical jets as well as military cargo planes: for instance, the A 29 is one example of highway where NATO planners, during the Cold War, built a road to accommodate NATO aircraft in case of war. Modifications to the section of the Autobahn to make it available for aircraft required just a few hours.

The Lockheed F-104 Starfighter is a single-engine, supersonic interceptor aircraft which later became widely used as an attack aircraft. Initially a day fighter, it was developed into an all-weather fighter in the late 1960s.

It was originally developed by Lockheed for the United States Air Force (USAF), but was later produced by several other nations, seeing widespread service outside the United States. One of the Century Series of fighter aircraft, it was operated by the air forces of more than a dozen nations from 1958 to 2004. Its design team was led by Kelly Johnson, who contributed to the development of the Lockheed P-38 Lightning, Lockheed U-2, Lockheed SR-71 Blackbird, and other Lockheed aircraft.