A Florida business’s surveillance camera captured video footage of a small plane exploding into a fireball after it crashed into a building housing a therapy center for children with autism in Fort Lauderdale over the weekend.

The crash occurred around 1:30 p.m. Saturday in the 1000 block of West Cypress Creek Road.

The Cessna 335 had taken off from Fort Lauderdale Executive Airport Saturday afternoon when, moments later, the plane crashed into a building in the 1000 block of Northwest 62nd Street.

Authorities said two people inside the plane were killed. Their identities have not been released by authorities, however, the pilot’s wife confirmed to Local 10 News that her husband, Eladio Marquez, was killed in the crash.

Marquez was a flight instructor and owned the plane, which is registered in New Jersey.

Marquez’s wife told Local 10 News reporter Andrew Perez that her husband loved what he did and was very passionate about flying.

Battalion Chief Steven Gollan, a spokesman for the Fort Lauderdale Fire-Rescue Department, said teachers and children were inside the building when the plane crashed. One of the teachers suffered minor injuries as she ushered the children from the building, but she was not hospitalized.

Officials said there were eight staff members and six children inside the building at the time of the crash.

Regional director Claudia Axelrod described the moments she and her staff members jumped into action as the roof began to collapse and the building went up in flames. Their focus was the children.

“They felt the building shake, and they thought it was a car that probably hit,” Axelrod said. “Quickly, the door began to catch on fire, so they grabbed each child. The person in charge started to shout, ‘You have this one, you have this one,’ to make sure that everyone was accounted for.”

Video footage from nearby H & J Electronics International Inc. shows the plane skidding across the parking lot, trailed by heavy smoke, and then erupting into flames upon impact.

Several people, including children, could be seen running out of the building. There were eight adults and five children inside the center at the time of the crash but none were injured.

Officials haven’t released the identities of the two who were on the plane. The Federal Aviation Administration and the National Transportation Safety Board will investigate the incident.

Everyone inside the building made it out safely. Firefighters who battled the blaze stopped it from spreading to other business, calling staff members who rushed the half-dozen children to safety the real heroes. 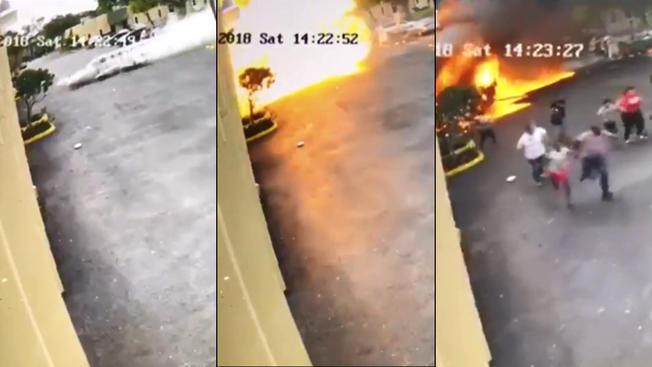