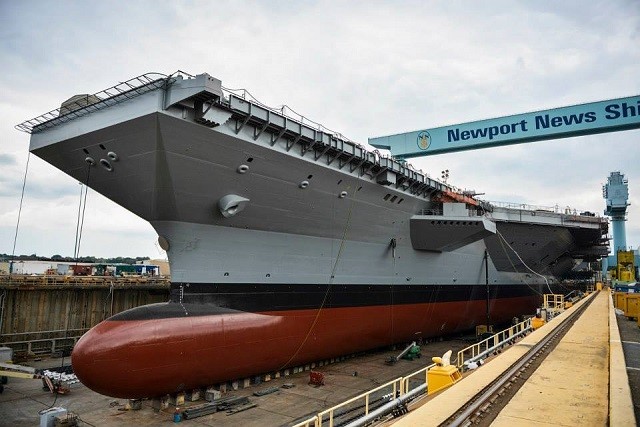 John F. Kennedy (CVN-79) is the second Gerald R. Ford-class aircraft carrier being built for the United States Navy. The ship is under construction and planned to be commissioned in 2020.

Newport News Shipbuilding division reached the midpoint in the construction of the nuclear-powered aircraft carrier John F. Kennedy (CVN 79) following the installation of one of the largest units on the ship.

Weighing approximately 905 metric tons, the unit is one of the heaviest of the planned steel structures, known as superlifts, that will be joined together to make up the second ship in the Gerald R. Ford class. The super lift of the aft section of the ship between the hangar bay and flight deck is 80 feet long, about 110 feet wide and four decks in height.

Combining 19 smaller units into one super lift allowed Newport News to install a majority of the outfitting equipment—grating, pumps, valves, pipe, electrical panels, mounting studs, lighting, ventilation, and other components—before the structure was hoisted into the dry dock using the shipyard’s 1,050-metric ton gantry crane. This approach resulted in this work being completed 14 months earlier than it was on Ford, said Lucas Hicks, Newport News’ vice president, CVN 79 program.

“This was a game changer for us,” Hicks said. “Performing higher levels of pre-outfitting represents a significant improvement in aircraft carrier construction, allowing us to build larger structures than ever before and providing greater cost savings.”

“This super lift represents the future build strategy for Ford-class carriers,” said Mike Butler, program director of CVN 79. “Not only did we build this super lift larger and with significantly more pre-outfitting, we managed much of the work on the deck plate with new digital project management tools as part of our Integrated Digital Shipbuilding initiative. The lessons we learned from this successful super lift will allow us to build even more similar super lifts on future ships in the Ford class.”

Kennedy is scheduled to move from the dry dock to an outfitting berth in the fourth quarter of 2019, three months ahead of schedule.