on Jan. 20, 1974. Phil Oestricher was the test pilot of  the first flight of the General Dynamics YF-16 was an
unintentional takeoff at Edwards Air Force Base (AFB)

Oestricher conducts high-speed taxi tests, the aircraft lifts off the runway, and rather than risk damage to the aircraft, the pilot elects to lift off and go around to come in for a normal landing. The first “official” flight is
made on Feb. 2.

“During the first high-speed taxi test, a violent lateral oscillation had set in as a direct result of pilot-commanded
oscillations as the aeroplane reached rotation speed (~120 kt). As the nose of the aircraft rose, the tailplane inadvertently scraped on the runway. The left wingtip missile and the right tail static probe also lightly contacted the runway. Phil chose to take off because the bird had begun to veer off to the left side of the runway, and he was faced with plowing through the desert or flying. Thankfully he chose to fly and possibly saved the entire program. After takeoff, Phil regained control and stayed up for six minutes, and landed uneventfully. Prior to the next flight, the stick sensitivity was reduced by 50% with gear down. Later, after complaints of not enough sensitivity, it was returned to the original.”

Instead, the second part of the footage shows the first real mishap in the YF-16 program’s brief history, which involved the No. 2 prototype.

As explained by Joe Stout in his article What A Wonderful Airplane: YF-16 First Flight (Flight 0) appeared on www.codeonemagazine.com, the No. 2 prototype flew for the first time in May 1974. No. 2 was nearly identical to No. 1, except that it had a gun, external tanks, and the ability to transfer fuel, which means it could be flown long distances with less need to refuel. Plans were made to take No. 2 to Le Bourget and on a tour of several European nations in the summer of 1975.

By this time USAF had selected the F-16 as its new fighter. And Belgium, Denmark, the Netherlands, and Norway were considering the airplane. General Dynamics pilot Neil Anderson performed a flight demonstration at a Fort Worth Division open house in May 1975. After completing his routine, he was unable to lower the landing gear. He finally had to skid the airplane in on its belly in the grass beside the Carswell AFB runway. Damage was surprisingly light, and the pilot walked away unharmed. But Paris was definitely out for ship No. 2. As a result of the mishap, YF-16 No. 1 made the first transatlantic flight for the Viper that same month. 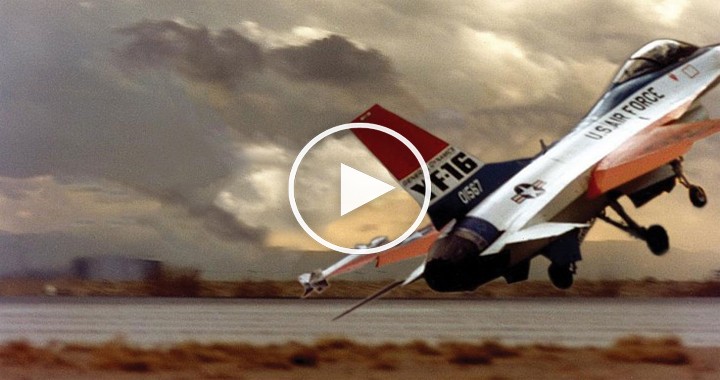