In this article, we will share with you the hilarious Dogfight video. The video seems to have surfaced about ten years ago.

In the video, a student in a T-38C getting a handle on basic fighter maneuvers (BFM), more commonly and broadly referred to as dogfighting, in a one versus one engagement.

You can see the gun funnel HUD symbology flop around as he struggles a bit to get the T-38’s nose pointed in the right direction to take advantage of his foe, then opportunity strikes! His instructor, gleefully declares ‘there’s the overshoot! Kill the motherfucker!” A number of maneuvers are executed with corrective commentary coming from the instructor in the backseat before the student has his adversary nearly in his sights.

Sensing a kill is near, the instructor starts doing his best Sam Kinison impression, screaming in blood-curdling fashion “Go get him! Kill him! Kill him! Killlll himmmmm! Put the nose on him and killl himmmmmm! Come on he’s out front, shoot him!” Meanwhile, the student exclaims frustratingly “I’m trying! Aaaaaaaahhhhh!”

Then, right as the student’s jet hits ‘bingo fuel’—alerting that there is just enough gas to return to base—and the fight is called off, he has his opponent in his gun funnel and his instructor lets loose a Joker-like victorious laugh.

Check out this little gem of a video below, as well as a bit tamer T-38C BFM instruction tape below it (also note the difference in energy states):

Here is another video of Offensive BFM engagement from the Introduction to Fighter Fundamentals (IFF) course. This video from the 49th FTS when it was at Moody AFB, GA circa 2003.

IFF is an eight-week course designed to transform newly graduated pilots selected to fly fighters into fighter wingmen. The 49th Fighter Training Squadron teaches pilots the discipline, attitude and culture of what it takes to be at the peak of combat aviation.

“It’s their first glimpse of the fighter culture,” said Maj. Michael Overstreet, 49th FTS assistant director of operations. “We are a fighter squadron. All of our instructors are fighter pilots. We have a culture that is unique and to our own.”

To ease the transition into more complex fighter aircraft, such as the F-22 Raptor and the F-35A Lightning II, IFF builds upon training learned in SUPT with a focus on the basic fundamentals of tactical aviation in the familiarity of the T-38C Talon.

“We try to help shallow the learning curve from pilot training to that B-course, or formal training,” said Capt. Cole Stegeman, 49th FTS chief of scheduling. “That’s why we use this program as a means of that indoctrination of fighter culture and what it means to be a fighter pilot.”

In addition to learning the basic fundamentals, students are taught how to become better wingmen. As a fighter pilot, you never fly alone. The term ‘wingman’ is not just a phrase, it’s a specific term that means so much more in IFF and carries a lot of responsibility in the world of aviation. Wingmen have the supporting role in the flight. They help the flight lead plan and organize the mission. They have visual lookout and sensor responsibilities and provide backup navigation for the flight as required. Wingmen execute as briefed or when directed by the flight lead and provide mutual support throughout all phases of the mission.

Columbus AFB is one of three Air Education and Training Command bases that train students to become fighter wingmen including Randolph AFB and Sheppard AFB, Texas. Communication and connecting with the other IFF squadrons is vital to ensuring they create pilots who are consistent and high quality.

“The mission of each IFF squadron is closely aligned to produce a high-caliber wingman,” Stegeman said. “We want to make sure that our buddies that are still in those fighter airframes get a good [pilot] they can further mold into a tactical aviator specific to that major weapon system.”

IFF is the first step toward building a mindset designed for the diverse and challenging environments of fighter aviation. As pilots progress through training, they gain self-confidence and develop a respect for the career field’s heritage. 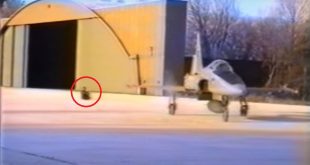 An RNoAF F-5A towing instructor on a sledge in Norway. (Image: screenshot from the video …