Last month’s tragic crash of a Pakistan International Airlines (PIA) passenger plane in Karachi took place due to human errors – the negligence of both the cockpit crew as well as the air control tower – and not because of any technical fault.

There was apparently no technical fault in the aircraft, said the preliminary investigation report submitted to the Aviation Division in a high level meeting on Monday.

PIA flight PK8303, carrying 99 people including 8 crew members, crashed into a densely populated residential area near Karachi airport on May 22 as it was making its second attempt to land. 97 people perished in the accident that also caused considerable damage to the residential areas.

A day after the incident, the Civil Aviation Authority (CAA) had notified an investigation team headed by its Aircraft Accident and Investigation Board (AAIB) President Air Commodore Usman Ghani

According to the report, the CAA officials, the cockpit crew, the control tower and the air traffic control repeatedly made mistakes. Sources privy to the document said the aircraft’s black box has so far not indicated the possibility of any technical fault.

The report said both the speed and the altitude of the aircraft was more than the recommended parameters when the pilot tried first landing. In the first landing, the aircraft touched the ground at the middle of 9,000 meter long runway.

The pilot also did not inform the control tower about jamming of the landing gears. It was also wrong decision on part of the pilot to attempt a second landing.

The plane stayed in the air for 17 minutes after the first landing attempt, a crucial time during which both the engines of the aircraft failed.

“The report on the plane accident will be put before the house along with reports on other air crash incidents that occurred since 2010 including Air Blue and Bhoja airlines’ plane crashes in Islamabad, PIA plane crash in Gilgit and other plane accidents,” he said.

Meanwhile, the Aviation Division disowned the report aired by certain television channels regarding provisional inquiry report into the plane crash.

“Media friends are informed that couple of TV channels have been referring to a report regarding crash of PIA flight PK-8303. No such report has been issued by the Aviation Division,” spokesperson Abdul Sattar Khokhar said in a brief statement.

The report, being circulated through the two TV channels, was not from any authentic source, he added.

A senior aviation official told Gulf News from Karachi that the provisional report has many loopholes in it and that the facts would be clearer only after a detailed report is released following decoding of black box data. The black boxes (cockpit data recorder and cockpit voice recorder) of the ill-fated aircraft have already been taken to France by the French Investigation Team. It may take months to compile the final report.

Initial investigation has revealed that multiple standard operating procedures (SOPs) were violated by both, the cockpit crew of the ill-fated Airbus A320 as well as the ATC. Apparently, warning signals and alarms in the cockpit of the plane were ignored, which eventually led to the disaster.

The aircraft was flying way beyond the standard safe landing speed and altitude, while it was as close as just four nautical miles from the landing strip at Karachi Airport and the ATC failed to check and raise an alarm over the non-deployment of the landing gear, which led to a near-disastrous first attempt to land, experts said.

The provisional report said both the speed and the altitude of the aircraft was more than the recommended parameters when the pilot made the first attempt to land. On its first attempt at landing, the aircraft touched the ground at the middle of the 9,000 metre-long runway.

The ATC had cleared the plane for landing in spite of its above-normal speed and altitude.

The pilot, in his part, did not inform the ATC about the jamming of the landing gears. Moreover, it was also a wrong decision on the part of the pilot to attempt a second landing.

The plane stayed in air for 17 minutes after the first failed landing attempt — a crucial time during which both the engines of the aircraft had stopped functioning.

The report further stated that fragments of the PIA aircraft’s engine were strewn on the runway for 12 hours after the crash, but the air site unit did not collect them and other aircraft were allowed to land on the runway. This was a violation of the SOP and could have caused damages to other aircraft. The report said the aircraft’s first engine was installed on February 25, 2019, while its second engine was installed on May 27, 2019.

All three landing gears of the aircraft were installed on October 18, 2014. The fateful plane was manufactured in 2004 and was inducted in the PIA fleet in October 2014. 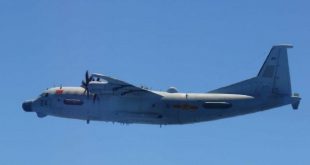 Credits: Japan’s defense ministry As we have reported earlier today that Chinese Fighter Jet and …