Air India Flight 182 was an Air India flight operating on the Montreal–London–Delhi route. On 23 June 1985 it was operated using Boeing 747-237B registered VT-EFO. It disintegrated in midair en route from Montreal to London, at an altitude of 31,000 feet (9,400 m) over the Atlantic Ocean, as a result of the explosion from a bomb planted by Canadian Sikh terrorists.

The remnants of the airliner fell into the ocean approximately 120 miles (190 km) west-southwest of the southwest tip of Ireland, killing all aboard: 329 people, including 268 Canadian citizens, 27 British citizens and 24 Indian citizens.

The bombing of Air India Flight 182 is the largest mass killing in Canadian history, the deadliest aviation accident in the history of Air India and was the deadliest act of aviation terrorism until the September 11 attacks in 2001. The Babbar Khalsa terror group was implicated in the bombings.

The bombing of this flight coincided with the Narita Airport bombing. Investigators believe the two plots were linked, and that those responsible were aiming for a double aircraft bombing. However, the bomb at Narita exploded before it could be loaded onto the plane.

Although a handful of members were arrested and tried for the Air India bombing, the only person convicted was Inderjit Singh Reyat, a Canadian national and a member of the ISYF, who pleaded guilty in 2003 to manslaughter.[ He was sentenced to fifteen years in prison for assembling the bombs that exploded on board Air India Flight 182 and at Narita.

The subsequent investigation and prosecution lasted almost twenty years. This was the most expensive trial in Canadian history, costing nearly C$130 million. The Governor General-in-Council in 2006 appointed the former Supreme Court Justice John C. Major to conduct a commission of inquiry. His report, which was completed and released on 17 June 2010, concluded that a “cascading series of errors” by the Government of Canada, the Royal Canadian Mounted Police (RCMP), and the Canadian Security Intelligence Service (CSIS) had allowed the terrorist attack to take place.

Air-India Flight 181/182 was operated by Boeing 747 “Emperor Kanishka”. It arrived at Toronto, Canada after a flight from Bombay, Delhi and Frankfurt.
In Toronto a 5th spare engine was fitted below the left wing. The engine had to be ferried for repairs in India. All passengers had disembarked for custom and immigration checks. Some passengers re-boarded the flight to continue to Montreal. A total of 270 passengers boarded the flight. In addition a fresh crew of 22 came aboard. The aircraft took off from Toronto runway 24L at 00:16 UTC. The flight to Montreal was uneventful and the airplane arrived at 01:10 UTC.

Sixty-five passengers destined to Montreal along with three Air-India personnel deplaned at Montreal. The remaining 202 passengers remained on board the aircraft as transit passengers and were not allowed to disembark.

The flight number changed to AI 182 because the flight was heading back to Bombay with en route stops in London and Delhi. A total of 105 passengers boarded the flight through gate 80. The aircraft took off from Montreal at 02:18 UTC. Its estimated time of arrival at London was 08:33 UTC.

At 07:15 UTC, at FL310 over the Atlantic Ocean an explosion occurred in the forward cargo compartment, causing a rapid decompression. The aft portion of the aircraft separated from the forward portion before striking the water. The wreckage sank to a depth of 6700 feet.

Investigation determined that a suitcase was also interlined unaccompanied from Vancouver via CP Air Flight 060 to Toronto. In Toronto, there is nothing to suggest that the suitcase was not transferred to Terminal 2 and placed on board Air India Flight 181/182 in accordance with normal practice. The aircraft departed Toronto for Montreal-Mirabel and London with the suitcase unaccompanied.
Probable Cause: 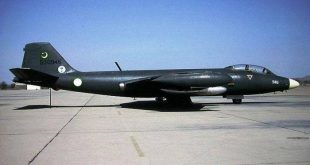 Credits: Pakistan Airforce 8-Pass Charlie was the codename of an unknown Pakistan Air Force B-57 …