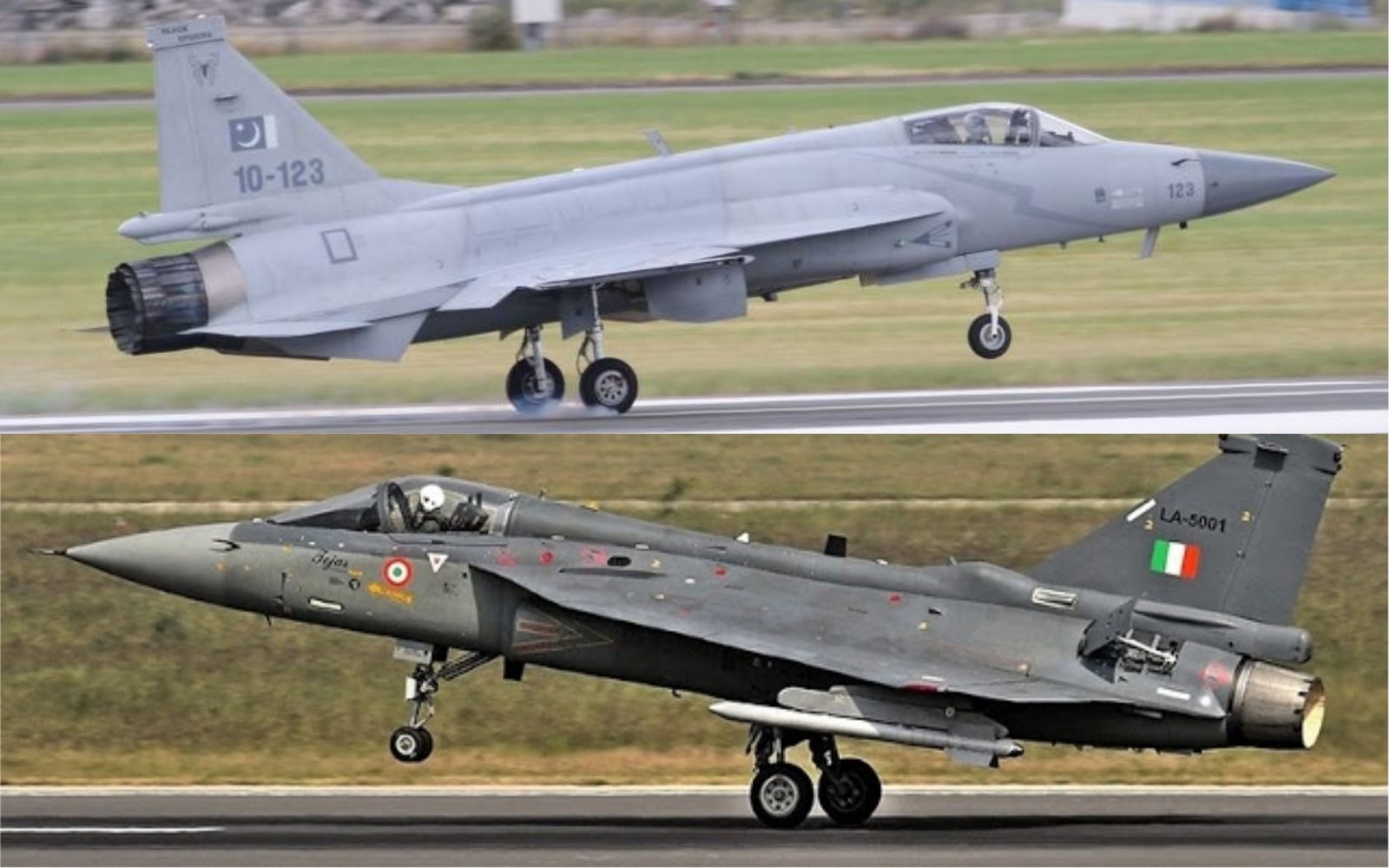 The PAC JF-17 Thunder or CAC FC-1 Xiaolong is a lightweight, single-engine, multi-role combat aircraft developed jointly by the Pakistan Aeronautical Complex (PAC) and the Chengdu Aircraft Corporation (CAC) of China. JF-17 make its First flight on 25 August 2003. It was Inducted in PAF 12 March 2007. So far PAF has inducted more than 100 units of JF-17 block 1 and block 2

The HAL Tejas is an Indian single-seat, single-jet engine, a multirole light fighter designed by the Aeronautical Development Agency (ADA) and Hindustan Aeronautics Limited (HAL). Tejas make its First flight on 4 January 2001. It was Inducted in IAF 17 January 2015. So far IAF has inducted more than 25 units of Tejas Mk 1 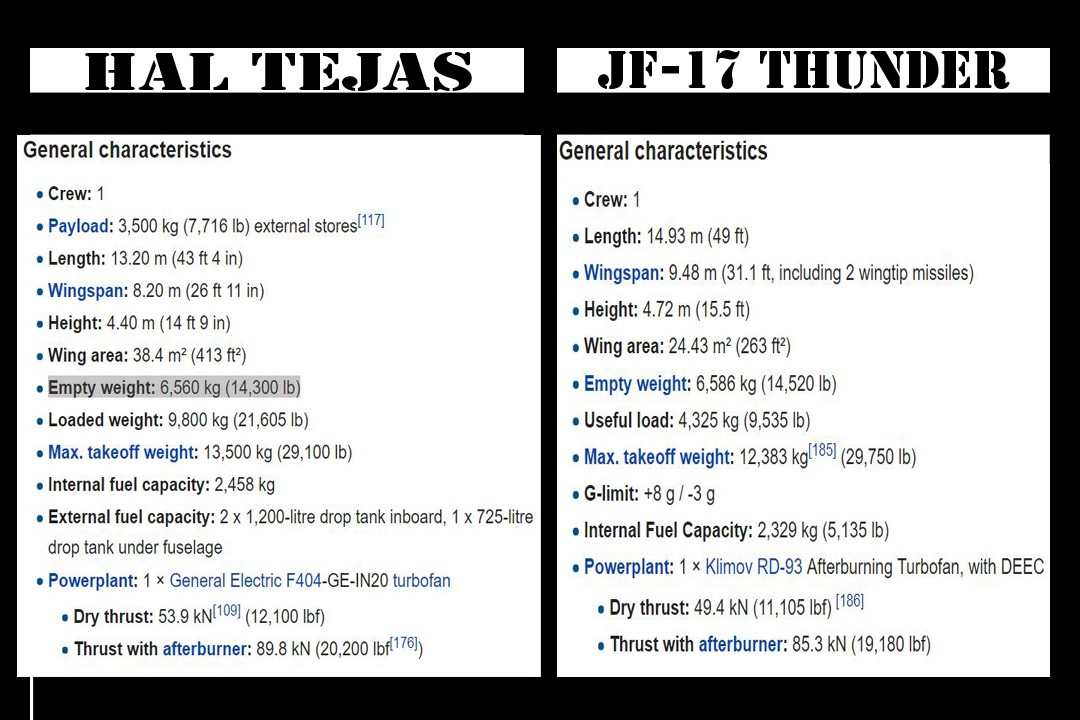 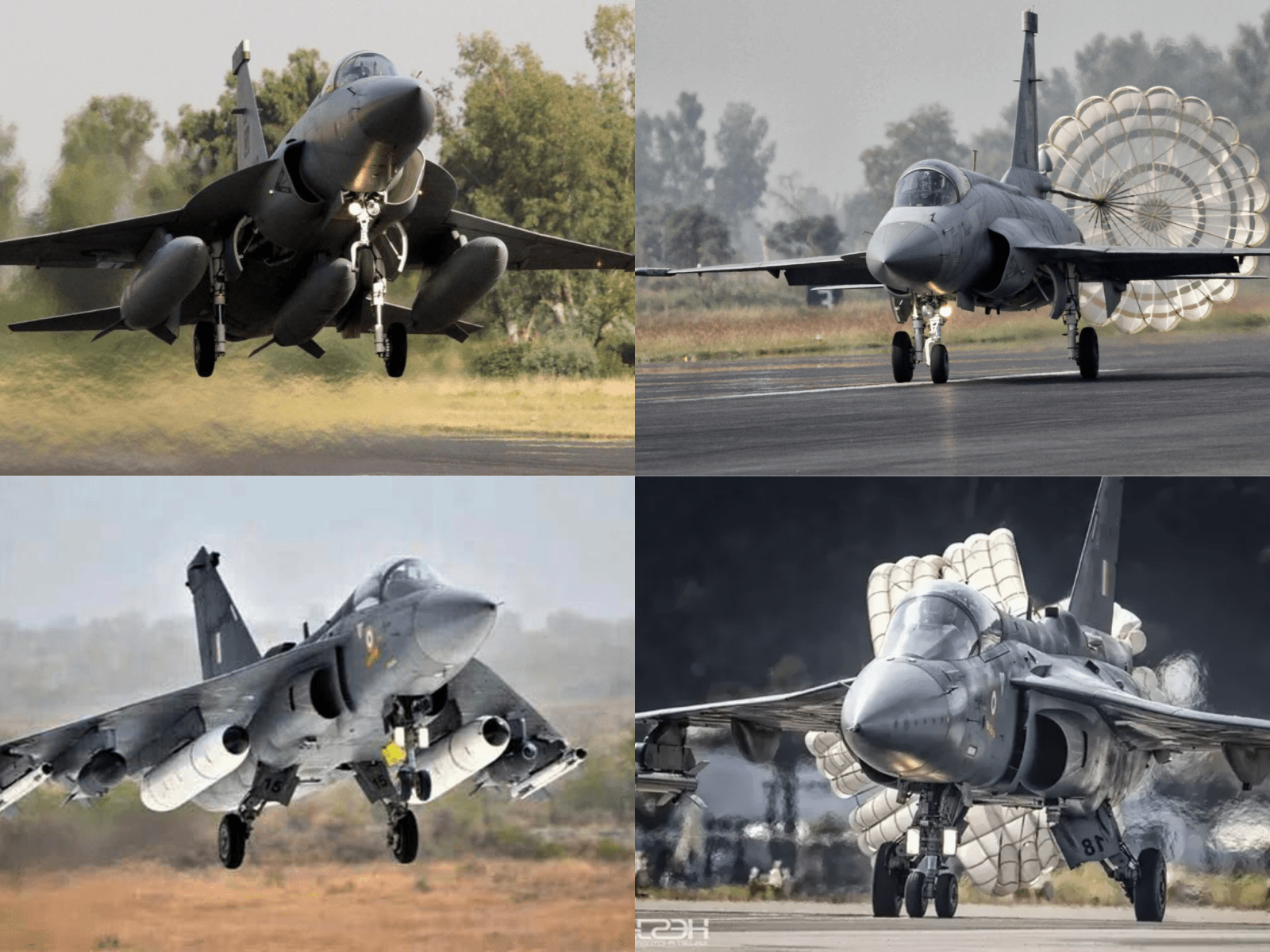 JF-17 Block 1—Production in China began in June 2006. Production of Block 1 was completed on 18 December when the fiftieth aircraft—58% of which was produced in Pakistan. A Block 1 JF-17 had cost approximately US$15 million per unit

JF-17 Block 3—Projected to feature further avionics advancements such as helmet-mounted display and sight (HMD/S) system, a new single panel multi-functional display (MFD), an active electronically-scanned array (AESA) radar paired with an infrared search and track (IRST) system, and a cockpit with a flight-control stick on the side an NRIET KLJ-7A AESA radar,more use of composites, a new engine, and a two-seater cockpit option, with a top speed of 2.0+ Mach. Pakistani Air Force officials have described it as a “fourth generation plus” fighter jet. According to unconfirmed media reports, the induction is expected to start around 2019. As of September 2016, the design of the JF-17 Block III has been finalized. The PAF is expected to place an order for 50 JF-17 Block-III fighter jets in the first half of 2017.

JF-17B—A twin-seater variant scheduled to be inducted into the Pakistan Air Force by 2017, its multi-roles include use for training and enhanced surveillance and support capabilities. The production of the first JF-17B was initiated by Pakistan and China in 2016. On 28 April 2017, the JF-17B took its maiden test flight in Chengdu

Tejas Mk 1A – HAL is now working on developing a new variant named Tejas Mk 1A which will be equipped with an advanced AESA Radar and an electro-optic Electronic Warfare (EW) sensor suite. It will also incorporate weight reduction along with easier service maintainability which will thus reduce downtime of each aircraft. It will also have a mid-air refueling probe to enhance its endurance and operational range. The timeline for this variant has been set at 2017. On 25 October 2015, it was reported that 100 Tejas aircraft will be equipped with an improved version of the EL/M-2052 AESA radar being developed jointly by Elta and HAL. On 20 December 2017, IAF initiated tender to buy 83 Mk 1A worth 33,200 crores from HAL.

Tejas Mk 1 Navy – Single seat prototypes (NP1 & NP2) powered by F404 engines are used for the initial testing. The Naval variant of Tejas successfully completed testing in Goa during which the short take off (200 meters) from Shore Based Test Facility was carried out along with hot refueling. The flight test from an aircraft carrier is scheduled for 2017. In December 2016, the Navy stated that the aircraft is overweight for carrier operations.

Tejas Mk 2 Navy -Twin- and single-seat carrier-capable variants for the Indian Navy. It will be equipped for carrier operation with ski-jump take-off and arrested landing. It will include strengthened airframe and landing gear and drooped nose for better cockpit vision.

Tejas Mk 2 – The Tejas Mk 2 is to feature the more powerful General Electric F414-GE-INS6 engine with 98 kN of thrust. The Ministry of Defence had sanctioned US$542.44 million (Rs 2,431.55-crore) for ADA to develop the IAF’s Tejas Mk 2 variant. In December 2008, the IAF committed to procuring an initial 105 Tejas Mk 2s. The Mk 2 will also see the incorporation of a new electronic warfare suite which is being jointly developed with Israel. This is to have a new glass cockpit with larger 8 x 12-inch displays. The Mk 2 will have some 25–30 percent commonality in parts with the Mk 1 and these parts are already in production. The Mk 2 is scheduled for flight testing by 2018, but this may be delayed by two or three more years to allow time to engineer the installation of the GE 414 engine. In August 2015, the Indian defense minister stated the first flight is likely to be in 2019 with an entry into service in 2022. According to DRDO chairman S. Christopher in 2018, the IAF has committed to procuring 201 Tejas Mk 2 aircraft.