10 Reason Why No One Dares TO Challenge Israel 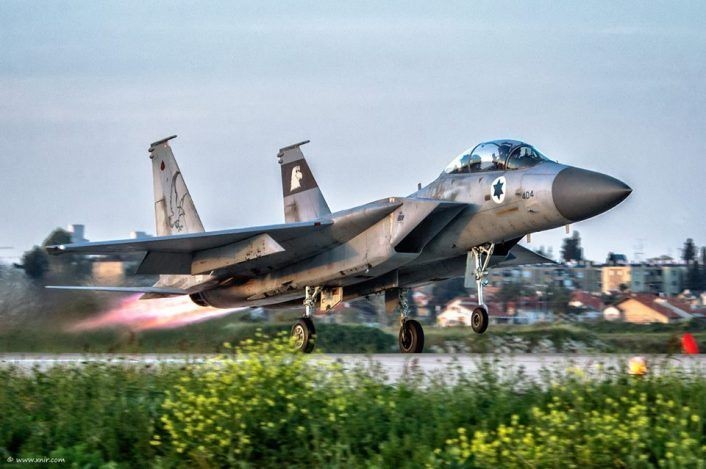 Much like the Israeli Air Force, the Israeli Army came from humble—but more established—beginnings. Israel’s ground forces had their origins in the Haganah, a Zionist paramilitary force created in the early 1920s to protect Jewish interests.

(These pieces, reposted together, appeared in August 2015 and are being reposted due to reader interest.)

The Haganah cooperated with British authorities but turned hostile in 1944 when the Axis neared defeat and the need for a Jewish state became increasingly clear. In 1947 the Haganah was reorganized into regular army units and renamed the Israeli Army two weeks after the founding of the State of Israel.

Since then, the Israeli Army has seen combat every decade since its founding. It has fought numerous wars in defense of Israel and embarked on numerous punitive expeditions into the Sinai, Lebanon, Gaza and the West Bank.

In 1947, Israel’s low population but the high level of education meant its citizens could train and organize a national army fairly quickly. Manpower limitations also meant the Israeli Army tended to gravitate towards technologically advanced, high firepower forces, and become more proficient at them than its neighbors. With that said, here are five Israeli army weapons of war that no one in the Middle East would certainly want to tangle with in a fight.

The brainchild of General Israel Tal , chief of the Armored Forces, the Merkava is Israel’s first and only indigenous main battle tank. The tank was specially designed for Israeli tank doctrine: low to the ground, with a powerful gun, the Merkava even had the engine placed in the front of the tank to provide protection to the crew. Combined with heavily sloped composite armor, Merkava made an excellent defensive tank, well suited to defending against Egyptian armored formations on the Sinai or Syrian forces on the Golan Heights.

Early versions of the Merkava had the same British-designed 105-millimeter main gun as the initial versions of the American M1 Abrams. Newer versions are armed with a locally produced 120-millimeter smoothbore gun. The Merkava’s main gun is accurate to at least 2,000 meters with High Explosive Anti-Tank (HEAT) and Armored Piercing (AP) rounds. Conventional rounds are supplemented by the LAHAT missile; capable of being fired from the barrel of the Merkava, the laser-guided LAHAT can engage targets out to 9,000 meters.

Merkava tanks were some of the first armored vehicles to be equipped with active protection systems against guided missiles. Israel has built just over 2,000 Merkavas in all versions, with 660 of the latest Mark IV built. 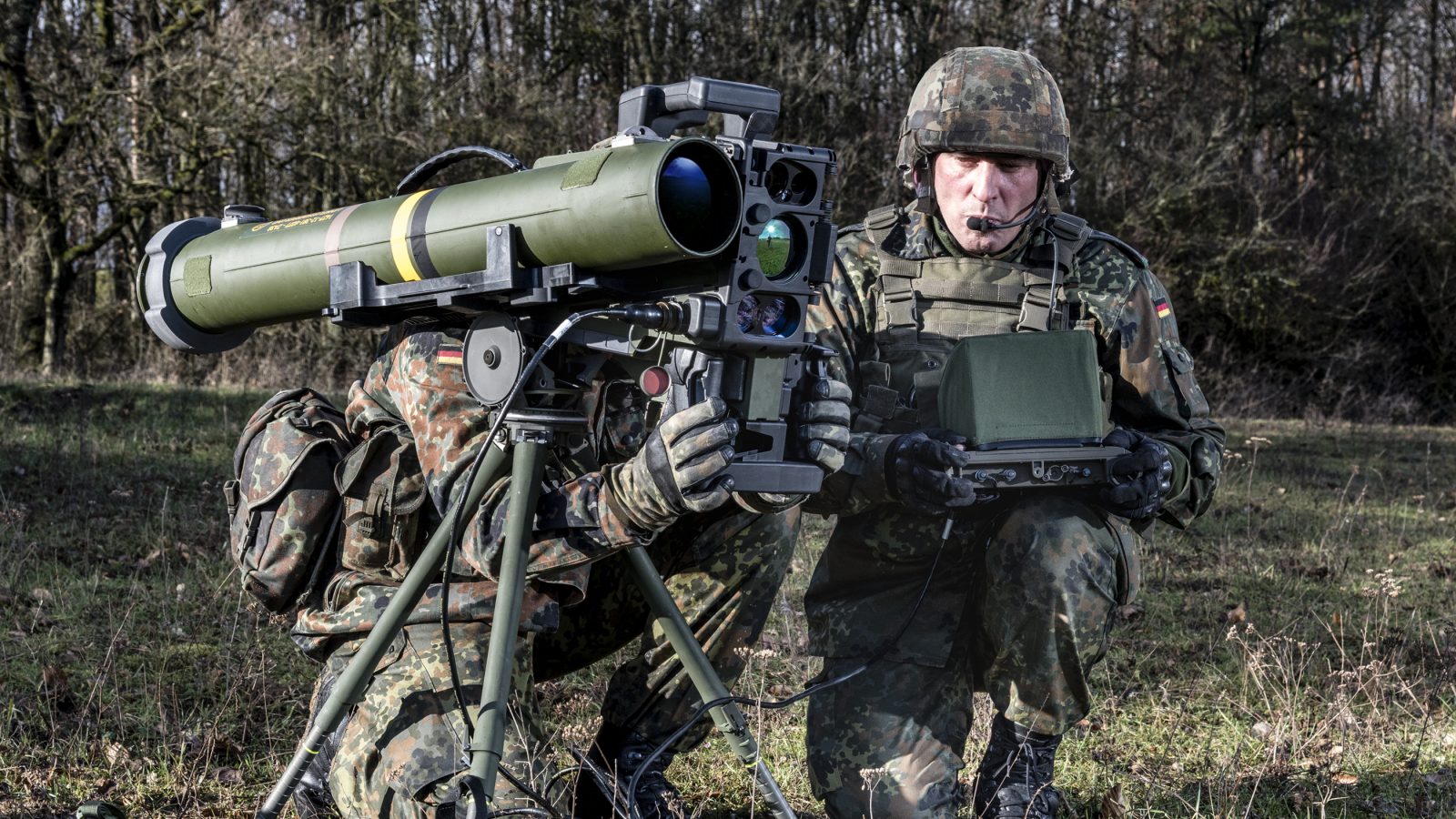 Spike is mounted on everything from ground vehicles to Seraph (Apache) helicopters, naval vessels, and drones. It can be used against tanks and armored vehicles, ships, aircraft, and even individual high-value terrorist targets. 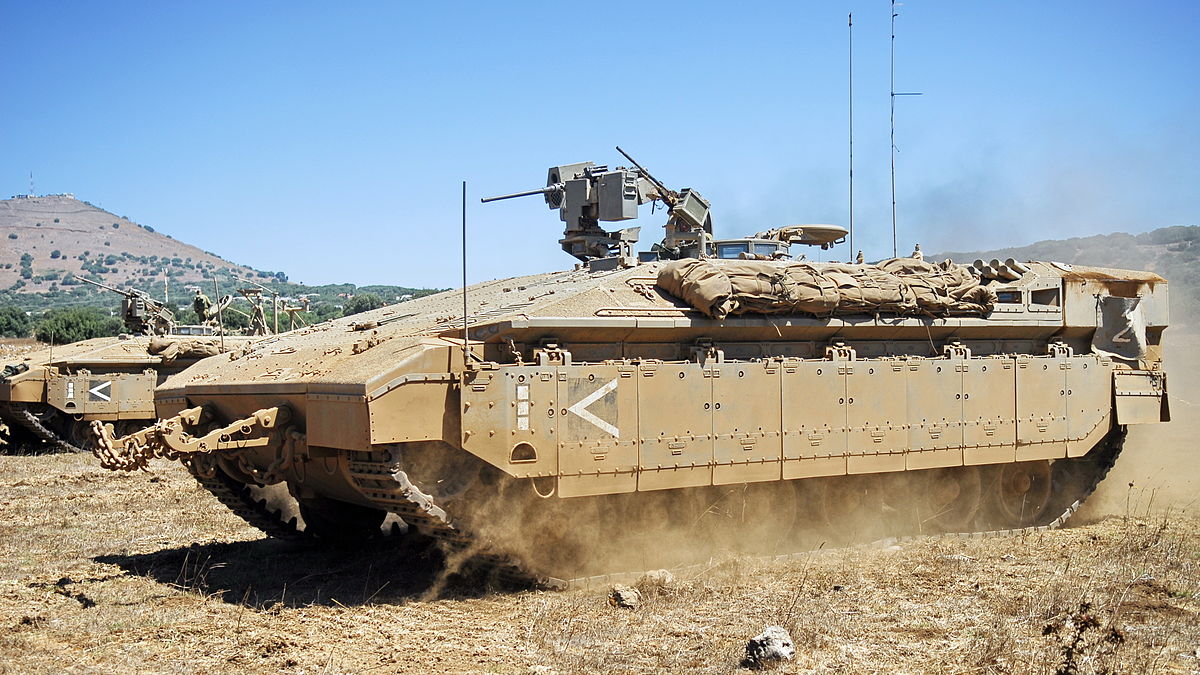 Namer is different however in actually being built from older tanks. A Namer infantry fighting vehicle is an early model Merkava Mk.1 tank with the turret and main gun removed, and an enormous amount of armor applied to the front glacis, sides and side skirts. A Namer weighs roughly as much as a Merkava before modifications, a testament to the amount of armor that has been added.

About 120 Merkavas have been converted into Namers, enough to equip about three battalions. Namer has a crew of three, including the driver, remote weapons station operator, and commander. It can carry nine infantrymen. 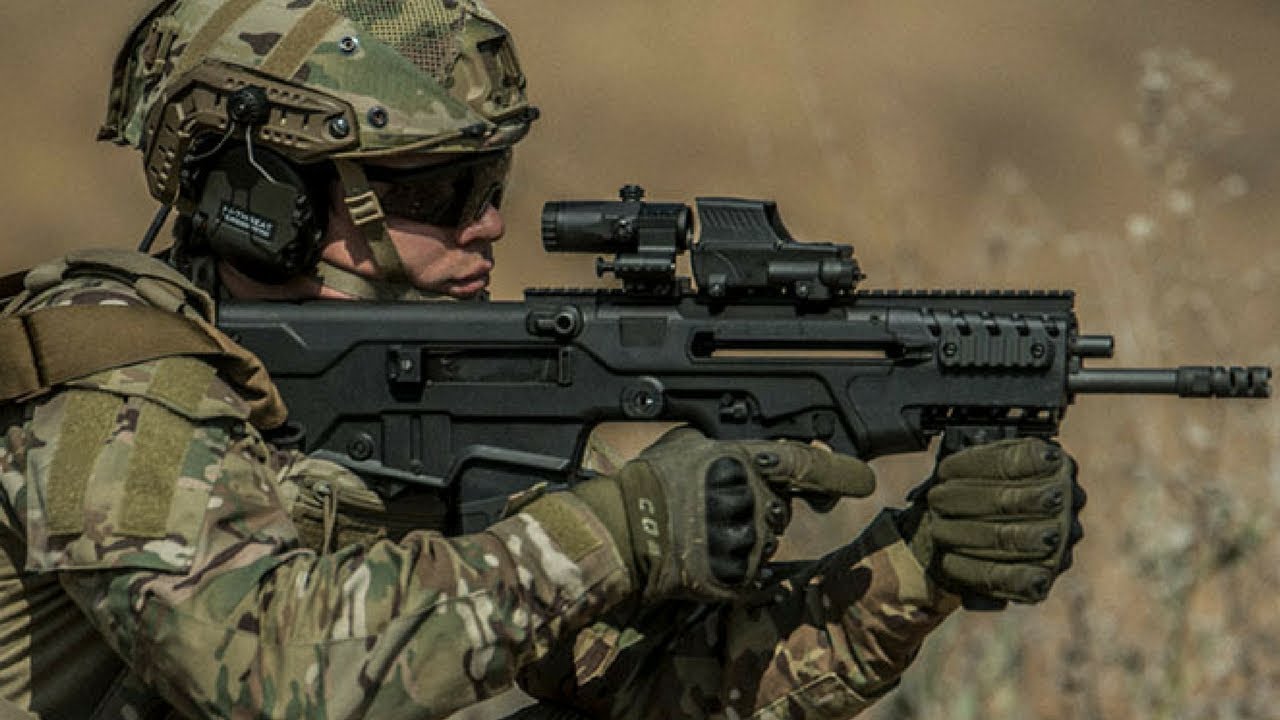 Israel’s second generation indigenous rifle, Tavor is the standard infantry weapon of the IDF. A futuristic looking rifle, the Tavor’s bullpup design—wherein the magazine is located in the buttstock—makes for a compact design while still retaining a rifle-length barrel.

The Tavor may look like a 21st-century rifle, but its roots are the strictly 20th century. The compact rifle uses a gas operated, rotating bolt design straight out of the AK-47, which in turn was inspired from the M-1 Garand. The bullpup design allows the rifle to be a compact 28 inches long while maintaining an 18-inch long barrel.

Tavor is chambered in 5.56 millimeter and can accept standard NATO 30 round magazines. Smaller, more compact versions have shorter barrels and are chambered in the pistol caliber 9mm Parabellum. 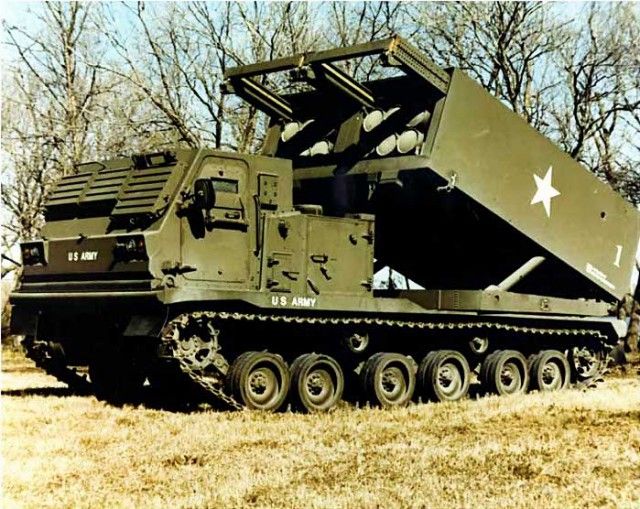 Israel has a tendency to rename American weapons systems, and this is one case in which the new name is much cooler than the old one.

The “Smasher” rocket launcher is actually the American M270 MRLS. A mainstay of the U.S. Army’s artillery branch, the M270 was developed in the 1970s as part of the “Big 5” of weapons systems that would transform the Army. Based on a modified M2 Bradley chassis, the “Smasher” carries twelve 227-millimeter rockets. A three-vehicle battery can send 23,184 cluster munitions downrange in one minute, saturating at one kilometer by one-kilometer area.

Israel has 48 “Smasher” systems. Currently, Israel is limited to rockets with a 40-kilometer range, but new 150-kilometer range rockets are in the pipeline. Such rockets will give Israeli artillery, positioned in Haifa, the ability to strike Damascus.

The Israeli Air Force was founded on May 28, 1948, exactly two weeks after the founding of the State of Israel. A motley force of veteran World War II pilots and obsolete aircraft, it has matured into one of the most powerful air forces in the world.

The Israeli Air Force (IAF) has been instrumental in Israel’s defense, providing air superiority over Israel, close air support over Israeli ground forces, and performing strikes against targets deep in the enemy’s homeland. Over the past three decades, it has also taken on a counterterrorism role, using airstrikes to assassinate terrorist leaders and destroy caches of weapons from the Tunis to Sudan.

The IAF has an estimated 648 aircraft of all types, manned and serviced by 35,000 active duty personnel. An additional 24,500 reservists can be called up during wartime. At total mobilization, the IAF enjoys a comfortable ratio of 91 personnel for every one aircraft, far above the Egyptian Air Force’s 30 to one ratio and the Royal Saudi Air Force’s 38 to one.

Israel received its first F-15 Eagle fighters as part of the “Peace Fox” program. Four F-15As—the precursor to the F-15C—were delivered on December 10, 1976. At the time, Israeli Defense Forces Chief of Staff Mordecai Gur said of the fighter, “A state with F-15s no longer resembles a state without them.” Israel would eventually be equipped with 58 F-15 fighters.

A lot was riding on the F-15, which the IAF anticipated would give Israel air supremacy over its territory and air superiority over the entire Middle East. They weren’t wrong. On June 2nd 1979, six F-15s escorting air strikes against the PLO in Lebanon shot down five MiG-21s in a single engagement. In September, four more MiG-21s were lost to F-15s. Between 1976 and the end of the 1982 Lebanon war, Israeli F-15s shot down 58 enemy planes with zero losses.

Israel’s version of the F-15E Strike Eagle, the F-15I Ra’am is a multi-mission aircraft capable of air superiority and strike missions. Israel announced its intention to procure the Ra’am in 1994, a result of its lack of long-range strike aircraft capable of hunting down Iraqi Scud missiles during the 1991 Gulf War.

In the event of an Israeli air strike on Iran’s nuclear facilities, the 25 Ra’am fighters will be tasked with striking Iran’s farthest and most heavily defended targets. 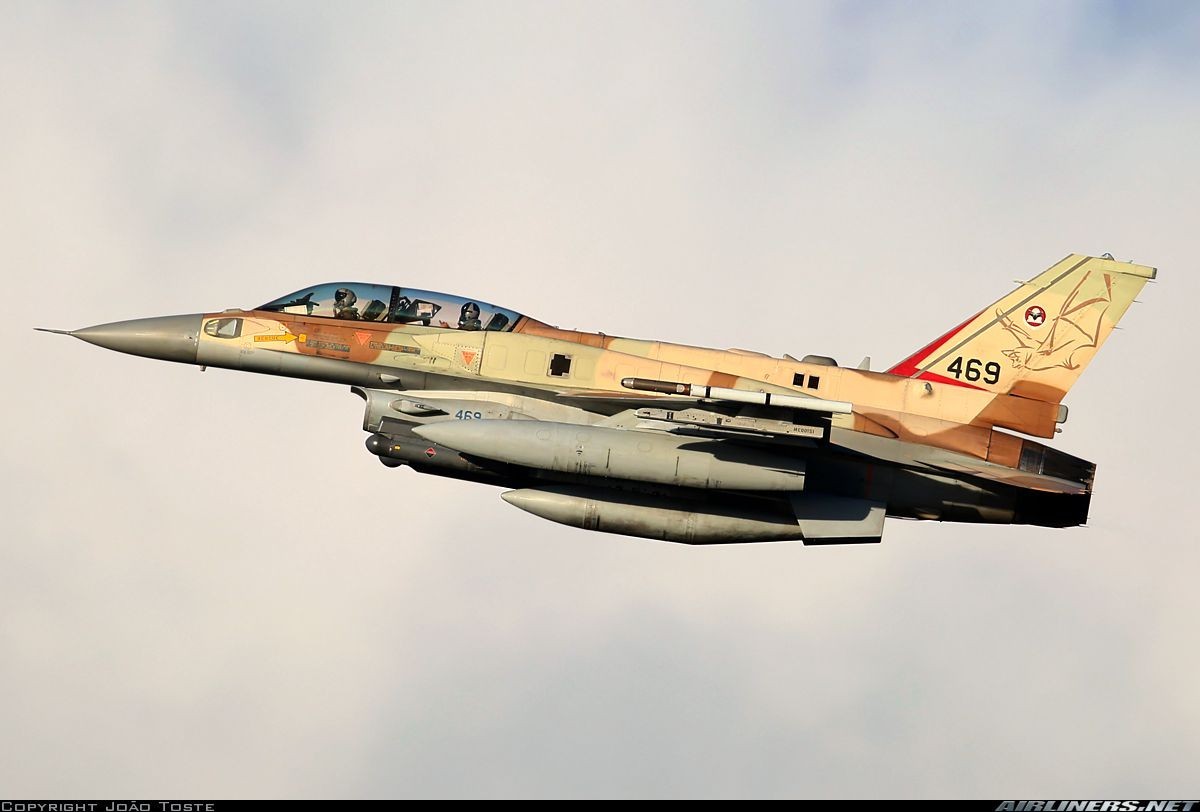 The F-16I Sufa is a derivative of the F-16 Block 52 multirole fighter. A two-seat fighter also capable of strike missions, it is probably best described as “Ra’am Lite.”

Israel is thought to have 99-100 Sufa fighters. Israel also has 243 older F-16 A/B/C fighters, making Israel’s F-16 force the largest outside of the U.S. Air Force. In any Israeli attack on Iran, the F-16I fighters will likely fulfill two roles: first knocking out Iran’s air defenses and then supplementing the F-15I in striking targets on the ground. 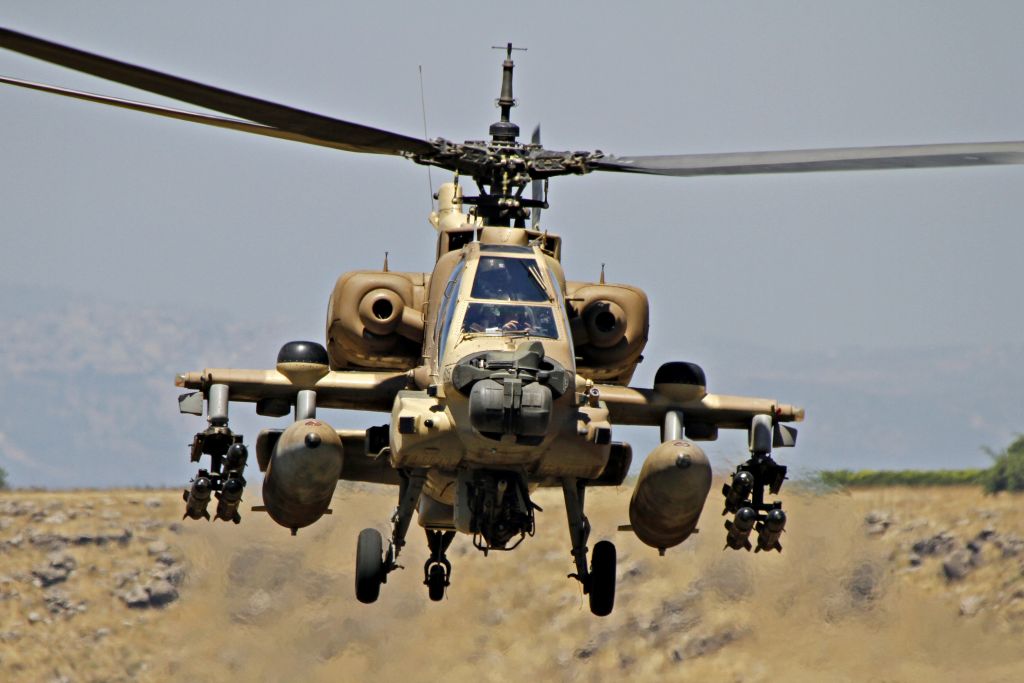 The Israeli Army is equipped with 42 AH-64A Apache attack helicopters. The “A” model is the original Apache helicopter, quite a bit older than the U.S. Army’s newest AH-64E Guardian. The AH-64As were purchased in the late 1980s, making the oldest at least 25 years old.

The Seraph has been used in anti-terrorism campaigns and recent conflicts, providing a hovering surveillance platform capable of executing its own anti-personnel strikes. Israel has used the Seraph to conduct strikes in urban areas, against terrorist targets hiding among civilian populations. The Seraph has assassinated Hamas and Hezbollah leaders and provided fire support to ground forces in the wars against Hezbollah in 2006 and Hamas in 2008 and 2014.

Israel embarked on a program to modernize the electronics of its A models, bringing them to an “AH-61Ai” standard. This is alleged to be the equivalent of modernizing them to the more recent AH-64D standard. The upgrades include new electronic warfare, anti-missile protection systems, battle management and communications systems. The AH-64i is armed with the Spike long-range air to ground missile system. 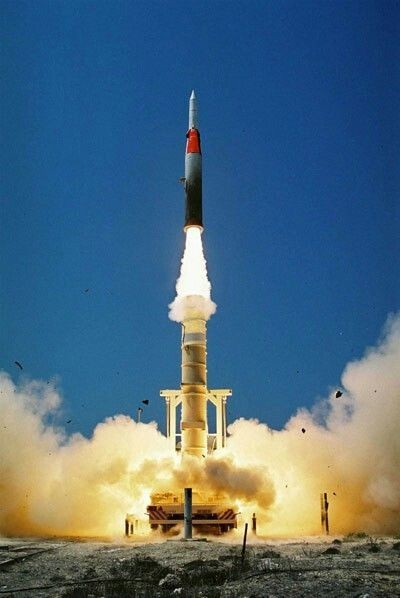 The Jericho III is the third missile to serve as Israel’s land-based nuclear deterrent. The Jericho III is believed to have a range between 4,800 and 6,000 kilometers and is capable of carrying a 1,000-kilogram warhead payload. A range of 4,800 kilometers would enable it to strike from Morocco to eastern India, while a 6,500-kilometer range would enable it to target as far as western China.

The missile is reportedly solid-fueled, meaning it can be launched with minimum preparation, and reportedly based in silos capable of resisting attack. The Jericho III, as well as the older generation Jericho II missiles, may be based at Palmachim Air Base.

Jericho III is believed to carry a single nuclear warhead or three low-yield multiple independently targetable reentry vehicles. The precise yield of Israel’s ICBM warheads is unknown but unconfirmed reports peg them at 20 kilotons. By way of comparison, the atomic bomb dropped on Hiroshima was 16 kilotons. 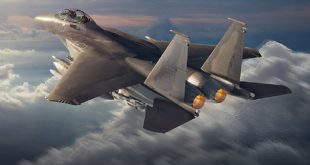