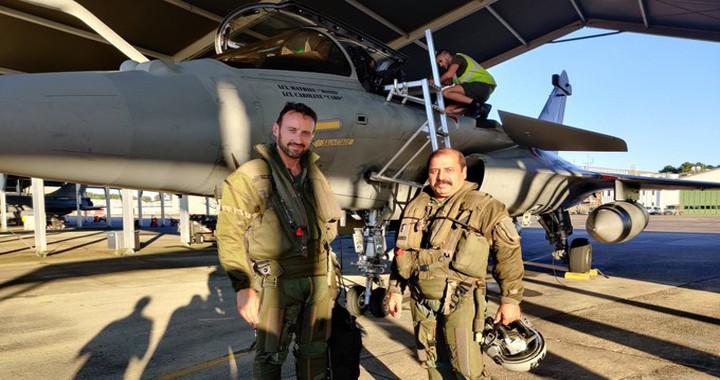 First of 36 Rafale fighter jets from France was received by Deputy Chief Air Marshal Chaudhary during his visit to France on Thursday.

The tail number of the plane is RB-01 which stands for the name of Air Marshal RKS Bhadauria.

The defence sources said the Rafale jet was accepted by a team of IAF officials at the aircraft’s manufacturing facility in Bordeaux after completion of certain testing formalities.

Sources said the first jet was test-flown on Thursday by IAF’s Deputy Chief of Air Staff, Air Marshal V.R. Chaudhary who is also leading the team that is in France.

He commanded Flight Test Squadron at Aircraft & System Testing Establishment (ASTE) & was the Project Director of National Flight Test Centre on Light Combat Aircraft (LCA) project. As DCAS, he was instrumental in the finalisation of contract of Rafale aircraft for IAF. pic.twitter.com/hH9cuXFska

Officials said that on Thursday, India moved one step closer to acquiring the multi-role combat aircraft. However, the aircraft will physically arrive in India after installation of India-specific enhancements upon it. The first jet is expected to arrive in India only around May 2020.

The IAF has said that the occasion of Dussehra was chosen for receiving the first Rafale jet because it falls this year on October 8 which is also celebrated as Air Force Day.

India had signed an inter-governmental agreement with France and Dassault Aviation in September 2016 to purchase 36 Rafale jets in flyaway condition from the French manufacturer. The deal had been signed for approximately ₹59,000 crore.

A set of IAF pilots have already been trained in France for flying the aircraft while more officers are expected to undergo training in different batches until the physical arrival of the aircraft in India.

The tail fins of the India-specific Rafale jets bear the initials RB-01 after the name of the Air Chief-designate Air Marshal R.K.S. Bhaduaria. He had played a crucial role in the negotiations with France before India finalized the deal for the 36 fighter jets.