The Indian Air Force could deploy its new Rafale fighter jets in the Ladakh sector as part of India’s overarching plan to strengthen its military posture in the region, where Indian and Chinese forces are locked in a tense border confrontation and disengagement has turned out to be a challenging process, people familiar with the developments said on Sunday, ahead of a key IAF commanders’ meet this week.

Due to be held on 22-24 July, the conference will discuss IAF’s preparedness and new purchases to deal with future expected combat situations.

Under a special request extended by the IAF, France is speeding up the deliveries of Rafale fighters to India. Originally, four jets were scheduled to be a part of the first batch of delivery. However, six jets are expected to be delivered at their home base in Ambala later this month.

Once deployed to the border in line with mission requirements, operationalisation of the Rafale jets will strengthen India’s military posture in the region.

An undisclosed source was reported as saying: “Air and ground crews have undergone full training on the aircraft including advanced weapons systems over the last year in France.”

The Rafales will have a cold engine start capability to operate from high-altitude bases. They will be equipped with Meteor beyond-visual-range missiles.

Under an emergency purchase in September 2016, India ordered 36 Rafale jets from France in a deal worth Rs590bn ($7.9bn) to enhance the airforce’s combat capabilities.

Originally, the first 18 jets were scheduled to be delivered to the IAF by February next year.

India-specific enhancements on the jets include cold engine start capability to operate from high-altitude bases.

India ordered 36 Rafale jets from France in a deal worth Rs 59,000 crore in September 2016 as an emergency purchase to arrest the worrying slide in the air force’s combat capabilities.

“For sure, there will be a period of integration with other systems, and it (Rafale) would be put to use as the operational planners deem fit,” Bahadur said.

In the Ladakh sector, the IAF is projecting its capability to carry out day-and-night, all-weather combat missions, with front-line fighter jets, attack helicopters and multi-mission choppers getting airborne regularly for demanding night-time missions from a forward base in the area.

The air force’s MiG-29 fighter jets, Sukhoi-30s, Apache AH-64E attack helicopters and CH-47F (I) Chinook multi-mission helicopters are among the platforms that are undertaking night missions in the mountainous terrain.

The Indian Rafales will be equipped with Meteor beyond-visual-range missiles whose no-escape zone is touted to be three times greater than that of current medium-range air-to-air missiles. 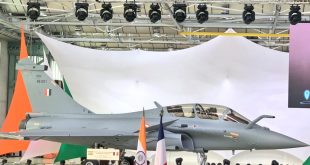 As we have reported earlier, Indian Air Force To Deploy Rafale Fighters Jet In Ladakh …