A Bell UH-1D Iroquis impacted the terrain during a takeoff attempt from Cauayan Air Base (CYZ/RPUY), Cauayan City, Isabela .

The helicopter was destroyed by the impact sequence and two of the five occupants onboard were fatally injured.

Two of the remaining three occupants onboard the aircraft are reported missing and one received unspecified injuries.

The chopper fell on a ramped area at 7:10 pm with two pilots, one back rider and two crew members on board, an initial police report said. According to the Philippine Air Force (PAF), the incident took place at the Tactical Operations Group 2, Cauayan Air Station.

Two “bodies” were seen in the vehicle, the police report said. One person was injured and brought to the Isabela United Doctors Medical Center for treatment while the other two passengers are missing, it also said.

The PAF said recovery of the aircraft is currently being carried out to confirm the number of casualties. It added that it will conduct a probe to determine the cause of the crash.

“As of this time, recovery of the aircraft is being executed to determine the number of casualties,” the PAF statement said. “The PAF will conduct an investigation to determine the cause of the incident,” it said.

Officers from the Cauayan City Police Station earlier told INQUIRER.net that the helicopter crashed at the TOG2 area.

The police station, however, declined to give further details about the crash. Initial reports from the Civil Aviation Authority of the Philippines (CAAP) jibed with the PAF statement. The CAAP said the helicopter had tail No. 8308 and crashed near the TOG2’s ramp area.

The CAAP said the helicopter carried two pilots, a passenger and two crew men. Two of them were “visible” from inside the helicopter while the crew men were taken to a hospital.

According to Cagayan Valley police chief Nieves, at least one of the injured crewmen were rushed to the Isabela United Doctors Medical Center. 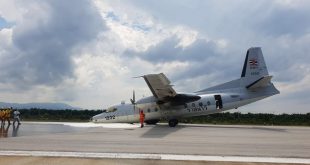