U.S. Central Command has confirmed that a U.S. Air Force F-15C Eagle performed a visual daytime intercept and inspection of an Iranian Mahan Air A310 passenger airliner flying as IRM1152 from Tehran, Iran, to Beirut, Lebanon, over Syrian airspace in fair weather conditions.

The F-15 maintained a horizontal separation of over 3,000 feet (about 1,000 meters) during the intercept according to statements from U.S. Central Command.

Video taken from the Iranian airliner later released by the Iranian State TV shows the moment the two jets approached the A310. Initially, the two F-15s were mistakenly reported as being Israeli Air Force fighters.

Iranian news media did show passenger video of what appeared to be the airliner maneuvering during the encounter as passengers screamed. Additional video showed one man with bleeding injuries to his nose and forehead. A report from Beirut, Lebanon, where the Iranian airliner landed, said that injuries sustained by passengers were minor.

Video footage reportedly from onboard the aircraft after the incident shows debris in the aisles and at least one passenger with blood running from their forehead. Others are seen wearing uninflated life jackets. Some emergency oxygen masks are seen deployed in the cabin, but no passengers appear to be wearing them.

According to Flightradar24.com data, the A310 made a climb followed by a quick descent: that must be the moment when the F-15s approached the airliner to perform their VID (Visual Identification). Based on the video and reports, it looks like the Iranian Mahan Air pilot performed a sort of avoidance maneuver when he saw the fighters or had a warning from the TCAS (Traffic Collidance Avoidance System).

The A310 landed safely Lebanon, though there were unconfirmed reports that at least four individuals had to be taken to the hospital after the plane touched down. A photograph reportedly of the plane on the tarmac Beirut-Rafic Hariri International Airport shows individuals being transferred to an ambulance.

U.S. Central Command spokesman Capt. Bill Urban said that the U.S. F-15 performed a visual inspection of the Iranian airliner as it passed within the vicinity of a U.S. air base in Syria. Capt. Urban said that the F-15 was on a “routine air mission” near an American military base in the region and that the aircraft had flown a, “Standard visual inspection of a Mahan Air passenger airliner to ensure the safety of coalition personnel at al-Tanf garrison”. Capt. Urban went on to say that, when the F-15 Eagle made positive identification of the Mahan Air airliner, the USAF pilot responding, “safely opened distance” between his aircraft and the airliner. Capt. Urban also said, “The professional intercept was conducted in accordance with international standards”.

Iranian authorities have now said they are investigating the incident.

“The incident is under investigation,” Iranian Foreign Ministry spokesman Abbas Mousavi said, according to Iran’s PressTV. “Due political and legal measures will be taken upon completion of the information at hand.”

Whatever may or may not have happened between the U.S. Air Force’s F-15s and Mahan Airlines Flight 1152 over Syria, it seems almost certain it will further contribute to the already heated tensions between the two longtime foes. 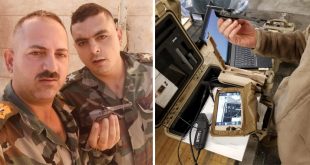