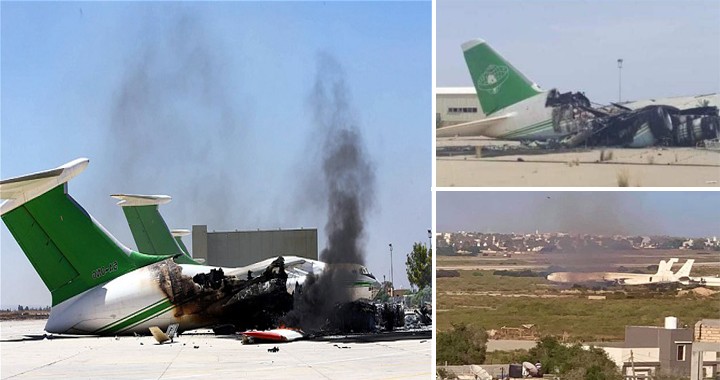 Antonov An-124, registered 5A-DKN, got destroyed at Tripoli Airport during military clashes.

The Antonov An-124 was destroyed in the ongoing military conflict between militia groups, while parked at the airport.

Since 2010, the aircraft was grounded at the airport of the Libyan capital. A surface-to-air missile has now destroyed the cargo aircraft.

The aircraft last flew in 2010 and since then, was parked at the airport.

#Libya's sole Antonov An-124-100 heavy cargo airplane was destroyed in #Tripoli's #Mitiga airport during the clashes among #Libya National Army (#LNA) and Jihadist factions of #GNA yesterday. Another An-124 of Libyan Arab Air Cargo had been confiscated in #Ukraine in 2017. pic.twitter.com/UbCgaXPmjx

The airport was hit by an air strike on April 8, initially suspending air traffic before flights resumed on a nighttime schedule only until April 22.

“Flights have been temporarily suspended because of this incident,” he added, without detailing the origin of the rocket fire.

Libyan Airlines diverted a Tripoli-bound flight from Istanbul to Misrata airport, Ghnewa said, some 200 kilometers (120 miles) to the east.

According to the authorities at Mitiga, diverted flights will soon be abe able to resume landing at the airport.

Air traffic at Mitiga had already been suspended several times in recent months, as forces loyal to the Tripoli-based government battle against fighters backing eastern commander Khalifa Haftar who launched an offensive on the capital in early April.

Only Libyan Airlines flies within the country, operating internal flights and regular connections to foreign destinations including Tunisia and Turkey.

Here is a Video of  aircraft arriving at Manchester Airport