The F-35B is substantially larger & heavier than the Harrier & it can carry much larger weapon loads & carry them much farther as well.

It is very much faster, very much in advance of the Harrier in all weapons & sensor systems & has a very broad range of abilities that the Harrier simply doesn’t possess.

In particular, the F-35B is an actual air-combat fighter of formidable capability.

Furthermore, The F-35B, like the Harrier, is a COTL/STOL/STOVL/VTOL capable aircraft, with weapons. The Harrier is seldom flown COTL (its brakes are very marginal) & the F-35B is seldom flown VTOL, although it has ~ 100% greater combat radius in VTOL than the Harrier.

The fifth-generation combat aircraft is designed to perform the ground attack and air superiority missions.

It has three Variants

Capable of vertical or short takeoff and landing

Named after a bird of prey, it is primarily employed on light attack or multi-role missions, ranging from close air support of ground troops to armed reconnaissance

In addition, the AV-8B is used by the United States Marine Corps (USMC), the Spanish Navy, and the Italian Navy.

A variant of the AV-8B, the British Aerospace Harrier II, was developed for the British military, while another, the TAV-8B, is a dedicated two-seat trainer. 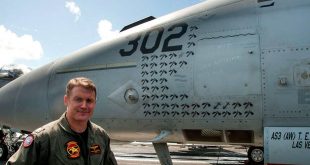 Lt. Cdr. Michael Tremel stands next to his F/A 18-E Super Hornet on board the …