As we have reported eariler that, the sophisticated US stealth plane Model 401 with “odd markings” on its fuselage made another test flight. The mystery aircraft, developed by Northrop Grumman subsidiary Scaled Composites, flew over the Mojave Desert in the southwestern US and was escorted by NASA F-15D fighter jet.

Now The Warzone, have shared new images showing one of the mysterious Model 401 ‘Son of Ares’ jets flying while covered in a mirror-like coating.

The images were taken on June 13th, a few days after our initial report on the testing, and they offer new insights and prompt new questions as to what the twin stealthy experimental jets and their high-flying Proteus cousin have been up to.

It looks like some primer paint or another coating exists around the canopy bow and the leading edges of the dorsal jet air intake. It is unclear if the aircraft has the same application on both sides.

This is undoubtedly one incredibly bizarre-looking treatment on an already alien-looking aircraft. The photographer who took the photos said the extremely bright glint coming from its fuselage made the aircraft very visible.

Would mirroring a flying object, or applying other exotic reflective surface treatments, help defend them against directed energy attacks?

Maybe that is exactly what testers are working on with Proteus, the Model 401 demonstrators, and the other players that have been so active in the area over the last two weeks.

The other thought we had is that this could be part of an ongoing test of infrared sensors, quite possibly infrared search and track (IRST) systems that are going to be fielded very soon within the Air Force and Navy. By using different coatings, including one that is blindingly effective, it could push the sensor to its limits and could help uncover hardware flaws and software issues that could occur in a real-world environment with the system.

A mirrored aircraft, in particular, may prove to be a unique challenge for these systems, and flying one alongside an exact copy of that aircraft without the treatment could provide a control variable to test against. The two Model 401s have been flying together for much of the testing that has occurred, according to flight tracking software. This would also help explain Proteus’ pod with the dark optical windows, which would house the infrared sensors, as well as the reason for other aircraft to take part in these tests, including F-117s, which have a reduced infrared signature not commonly found on combat aircraft.

Once again, these are just a couple of possibilities. Testing these odd reflective coatings, including a mirror-like covering, on these aircraft could be for another reason altogether. What is clear is that charcoal and mirrored-over ‘Son of Ares’ jet would be one heck of a sight to behold close-up. Maybe one day we will get photos of what this aircraft looked like with such an exotic application to its skin.

The prototype has stealth aircraft characteristics and shaping. Air intake is aft of the cockpit, two narrow S-duct inlets preventing radar waves from reaching the engine fan blades. V-tail configuration is like that of the YF-23 (Northrop Grumman is the parent company of Scaled Composites). The prototype has a similar configuration to the General Atomics Avenger 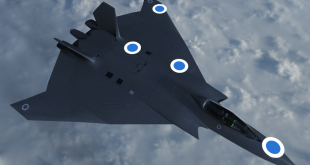