Top Gun: Maverick is a direct sequel to Top Gun, and will hit theaters 34-years after the original debuted in 1986. Directed by Joseph Kosinski, Top Gun 2 marks the return of Cruise’s LT Pete “Maverick” Mitchell, a hotshot Navy pilot with a need for speed who trained at Top Gun, the Naval Fighter Weapons School at Naval Air Station Miramar.

In the trailer for Top Gun: Maverick, the lack of Val Kilmer supports the theory that Iceman is dead.

The Top Gun: Maverick cast includes Miles Teller as Goose’s son, Rooster, Glen Powell as a pilot trainee, and Jennifer Connolly as the owner of a bar and Maverick’s love interest. Also joining Cruise from the original film is Val Kilmer as Vice admiral Tom “Iceman” Kazansky, a fellow instructor and rival-turned-friend of Maverick. Although Kilmer will appear in the sequel, he was notably absent in the first trailer.

There is a clip of Maverick at a funeral for a fallen comrade, which has led many to believe that Iceman is in fact dead.

The fact that Kilmer had to beg for his return in Top Gun: Maverick indicates that he didn’t originally have a role in the story, which makes it all the more likely that he will be taken out of the picture early on.

If Iceman is killed off, it offers the film a chance to include him while still keeping the bigger picture intact. With Kilmer remaining quiet on the subject, theories surrounding Iceman’s role will only continue to grow.

Unfortunately, with Top Gun: Maverick’s release date pushed back to December as a result of the coronavirus lockdowns, it may be a while before we get another trailer.

Top Gun: Maverick will see some new faces as the sequel prepares for its long-awaited release.

He’s got a gig as an instructor at Miramar and aims to impart his wisdom to a new generation played by Miles Teller, Glen Powell, Jay Ellis, Lewis Pullman, Greg Tarzan Davis, Danny Ramirez and Monica Barbaro.

Joseph Kosinski (who directed Cruise in “Oblivion”) is behind the camera, and the star brought in his “Mission: Impossible” writer/director Christopher McQuarrie to work on the script.

The original Top Gun was directed by Tony Scott and also starred Kelly McGillis, Anthony Edwards, and Tom Skerritt. The film won an Academy Award for Best Original Song for “Take My Breath Away” performed by Berlin. In 2015, the United States Library of Congress selected the film for preservation in the National Film Registry, finding it “culturally, historically, or aesthetically significant.”

That we’ve now got two extra days to enjoy “Top Gun: Maverick” is welcome news in a week where noted tech “visionary” Elon Musk announced to a group of fighter pilots that their “era has passed.” Maverick is sure to disagree and will aim to prove that kind of nonsense wrong. 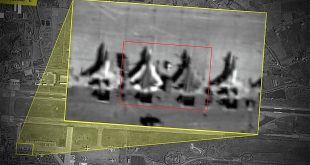 According to the multiple reports, Russian Aerospace Forces have received the first series-production multi-role fifth-generation …