Boeing has delivered the final Block II F/A-18E/F Super Hornet to the US Navy (USN), handing over the last aircraft ahead of the retrofit and new-build Block 3 upgrade effort.

“Delivery of this last production Block 2 Super Hornet is […] a stepping stone along the path to continuously evolving our platforms to meet the US Navy’s ever-evolving needs,” said Captain Jason Denney, Program Manager of the F/A-18 and EA-18 Program Office (PMA-265). “Block 3 delivery is just steps behind and the production lines won’t miss a beat, with the first two US Navy Block 3 test jets delivering in the next two months, followed by delivery of 24 E/F aircraft over the next year for our international customer, Kuwait.”

In total, the USN received 322 one-seat F/A-18Es and 286 two-seat F/A-18Fs as part of the Block II Super Hornet program, which started in 2005. The aircraft fuselage is built at Northrop Grumman’s facilities in El Segundo, California. The final assembly is completed at Boeing’s St Louis facilities.

The Super Hornet, which is about 3,180kg (7,000lb) heavier and has 50% greater range than the smaller classic Hornet, was ordered by the USN to replace the Grumman F-14 Tomcat, which was retired in 2006.

The USN and Boeing are also working on a Block III Super Hornet variant. The first two of the service’s Block III test jets are scheduled to be delivered in the next two months, says the USN. The service plans to flight test those aircraft at Naval Air Station Patuxent River in Maryland and Naval Air Weapons System China Lake in California in late spring 2020.

The Block III aircraft include a faster mission computer and a more-robust communications system – upgrades that could eventually help the aircraft control and direct loyal wingman unmanned air vehicles. The aircraft also have conformal fuel tanks, which carry 1,590kg of extra fuel, and a 10,000-flight-hour lifespan.

Previous New Evidence Suggests That Iceman Will Die In Top Gun: Maverick
Next Here’s Why India Should Buy F-15EX Fighter Jet From U.S. 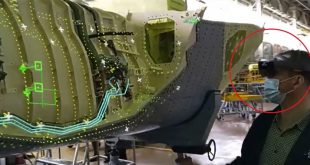