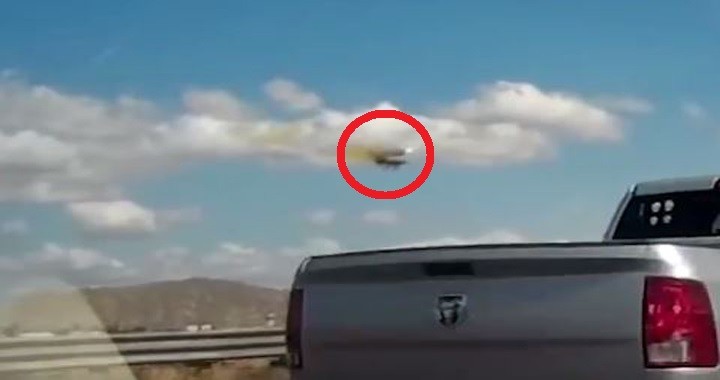 on May 17, 2019, A General Dynamics F-16C of the South Dakota Air National Guard 114th FW, Sioux Falls, SD, crashed due to hydraulic problems into a warehouse immediately after takeoff west of March Air Reserve Base, Moreno Valley, Riverside County, California.

The aircraft was destroyed and the sole pilot on board ejected safely.

A week after the crash new videos have surfaced showing the pilot ejecting while on final approach to the base’s runway.

The dashcam video, taken from the highway that straddles the base, shows the F-16 descending with its wing dipped to the right before the pilot ejects. The jet then begins a slight climb and appears to slow. This is not uncommon after an ejection as the weight and balance of the aircraft instantly shifts to a nose-light configuration.

The second video is the uncropped version of the first.

The third video was released shortly after the incident and shows the last moments of F-16’s uncontrolled flight that occurred just after it exited the frame in the first video. In that video, the F-16 is seen flying very slowly in the right bank before crashing through the roof of a warehouse of an aquarium products company.

The jet itself is still sitting in the warehouse that it crashed into. Its removal could come any day, but doing so will be tricky. Its live armament was already removed from the area and disposed of by via a controlled detonation.

The pilot was not hurt, said Maj. Perry Covington, director of public affairs at the base. But at least 12 people on the ground suffered minor injuries because of debris from the crash.