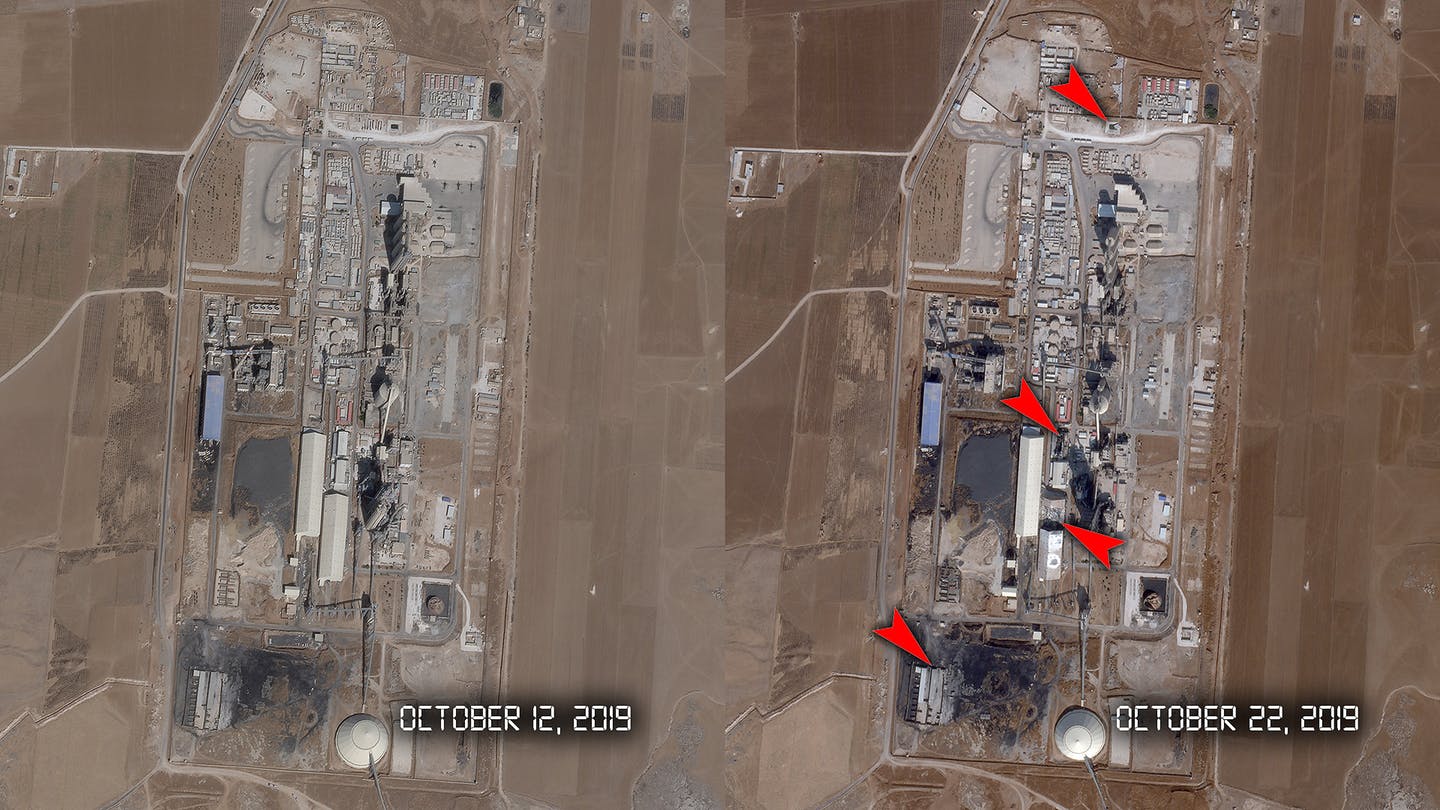 As we have reported earlier that Two U.S. Air Force F-15E Strike Eagles aircraft supporting Operation Inherent Resolve, carried out an airstrike on Lafarge Cement Factory, to destroy an ammunition cache and prevent it from being seized by Turkish-backed Free Syrian Army.

Satellite imagery that The War Zone has exclusively obtained calls into question the scale, scope, and effectiveness of airstrikes the U.S. military carried out on its own key base in northern Syria. U.S. personnel had operated the facility alongside their predominantly Kurdish allies, the Syrian Democratic Forces, or SDF, up until being abruptly evacuated last week under very controversial orders.

The photos indicate that a substantial portion of U.S.-constructed structures at the site remain intact despite statements that the strikes were supposed to have degraded “the facility’s military usefulness.”

Satellite imagery that The War Zone obtained of the site as it existed on Oct. 12 and then how it appeared on Oct. 22, after the withdrawal and subsequent strikes, seem to tell a different story about just how useful the installation may remain now.

It’s impossible to tell from the imagery what the inside of the remaining structures might look like and what the U.S. and other coalition forces removed before making a hasty retreat.

The satellite images from Oct. 12 and Oct. 22 make clear that the base’s occupants had evacuated a substantial number of helicopters, vehicles, and other equipment, including entire shipping containers before they left for good.

The U.S. military publicly announced that a pair of U.S. Air Force F-15E Strike Eagles had struck the now-defunct Lafarge Cement Factory in northern Syria, on Oct 16, 2019. This facility sits along the highly strategic M4 highway between the cities of Ain Issa and Kobane, also written Kobani, and had served as the “headquarters of the de facto Defeat-ISIS coalition in Syria,” U.S. Army Colonel Myles Caggins, the chief spokesperson for the U.S.-led coalition fighting ISIS in Syria and Iraq, said on Oct. 15, 2019.

The United States has been hastily pulling troops out of cities across northeastern Syria in increasing numbers after Turkey launched its own incursion into the region, dubbed Operation Peace Spring, ostensibly targeting the SDF, in cooperation with the Turkish-backed Free Syrian Army (TFSA), on Oct. 9, 2019.