U.S. F-15s Bombed Coalition Headquarters To Prevent It From Being Seized By Syrian Army 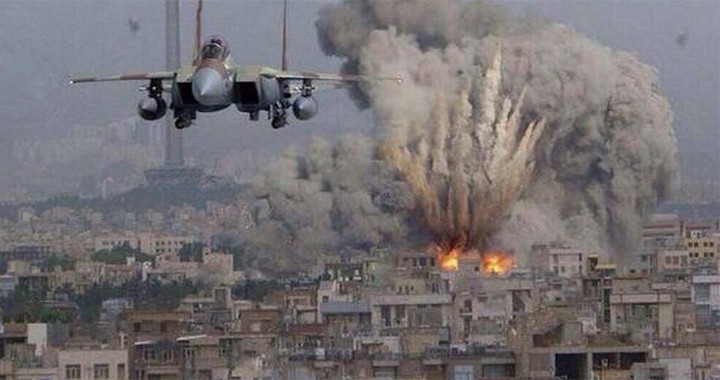 Two U.S. Air Force F-15E Strike Eagles aircraft supporting Operation Inherent Resolve, carried out an airstrike on Lafarge Cement Factory, to destroy an ammunition cache and prevent it from being seized by Turkish-backed Free Syrian Army, or TFSA, that along with the Turkish forces continue to move south with the goal of uprooting the Kurdish fighters, which Turkey views as terrorists that threaten its national interests.

“On Oct. 16, after all Coalition personnel and essential tactical equipment departed, two Coalition F-15Es successfully conducted a pre-planned precision airstrike at the Lafarge Cement Factory to destroy an ammunition cache, and reduce the facility’s military usefulness,” US Army Col. Myles Caggins, a spokesman for the US-led military coalition fighting ISIS, said in a statement.

According to Col. Myles B. Caggins III, OIR Spokesman, the US-led coalition forces had just completely vacated the Lafarge Cement Factory, in northern Syria, as part of the withdrawal of forces that follows U.S. President Donald Trump’s tacit approval to Recep Tayyip Erdogan to launch an invasion into northern Syria.

On Oct. 16, after all #Coalition personnel and essential tactical equipment departed, two Coalition F-15Es successfully conducted a pre-planned precision airstrike at the Lafarge Cement Factory to destroy an ammunition cache and reduce the facility’s military usefulness.

The pre-planned airstrike was likely needed because US troops were fleeing the battlefield so fast that they had no time to evacuate all their equipment and destroy facilities.

The decision to pull out all U.S. forces from northern Syria thus giving the go-ahead to Turkish intervention in Syria was then confirmed by Trump in a series of tweets on Oct. 7, 2019.

The Lafarge Cement Factory, that had been the headquarters of the anti-Daesh coalituin in Syria, had started been evacuated on Oct. 15, when the US-backed Syrian Democratic Forces (SDF) had left and set fire to their facilities and equipment:

From Col. Myles B. Caggins III, Coalition Military spokesman @OIRspox, on Kobani: "As Turkish-backed militias advanced towards the Lafarge Cement Factory, between Kobanî and Ain Issa, on Tuesday, Oct. 15, the SDF set fire to, then vacated, its facilities and equipment…."

Once the remaining US forces, who remained in separate facilities, had also vacated the Cement Factory, the two Strike Eagles wiped out the base.[

While there is no confirmation about the U.S. Air Force unit involved in the air strike, it’s worth noticing that 12 F-15Es belonging to the 389th Fighter Squadron of the 366th Fighter Wing from Mountain Home Air Force Base, Idaho, have recently replaced the Strike Eagles of the 335th FS with the 4th FW from Seymour Johnson AFB, North Carolina, at Al-Azraq Air Base, in Jordan.

Aircraft spotters noticed the aircraft (flying as “TABOR 21-26” and “TABOR 31-36”) during their stopover at RAF Lakenheath on their way to the Middle East.

Dubbed Operation Peace Spring the Turkish operation was officially launched on Oct. 9, 2019, and started targeting the once U.S.-backed and predominantly Kurdish Syrian Democratic Forces (SDF), which Turkey views as terrorists.