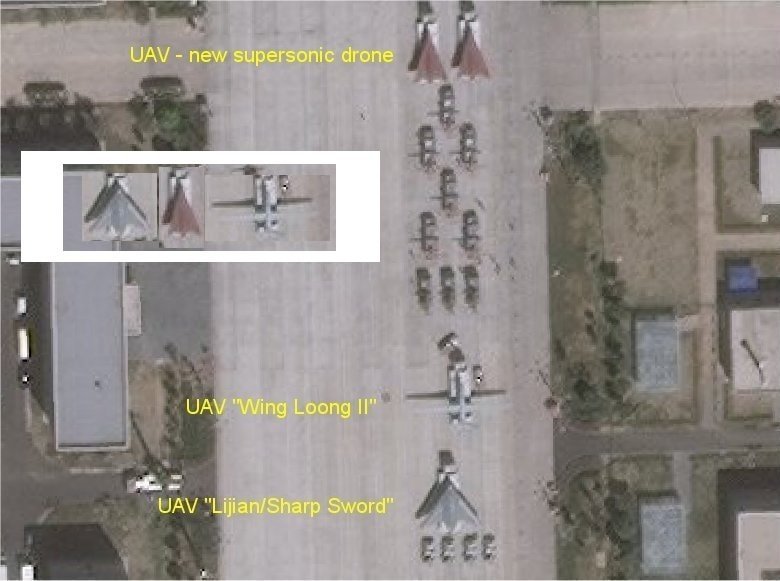 on October 1st the 70th anniversary of the founding of communist China will be marked by a huge military parade that will pass through Beijing’s Tiananmen Square.

The one that has caught our eye the most is a wedge-shaped aircraft that appears to be a very high-speed drone.

The satellite photo of the drones lined up are low res, but enough to compare them somewhat to eyeball possible dimensions, assuming the drone in the middle is indeed a Wing Loong II, which is 11m long, with 20.5m wingspan. pic.twitter.com/W8a26GKgPQ

Based on the limited information available, the shape of this does not appear to be new. Satellite images have been floating around showing a similar platform for a number of years, with the best image emerging last year from the PLAAF airbase near Malan in Xinjiang province.

The image shows a number of drones laid out on a ramp area. All are known aside from the wedge-shaped one. UASvision.com, which did a writeup on the image when it first surfaced, estimated its dimensions as 40 feet long by roughly 18 feet wide.

The rumor of the potential existence of a number of increasingly complex, high-supersonic, or even hypersonic developmental Chinese drones goes back the better part of a decade.

Eastpendulum.com has kept a close eye on developments in this shadowy space and has uncovered a number of patents that match the planform in question.

A number of flight tests likely supports the existence of this craft, and possibly its developmental progenitors, which would be just one of multiple extremely high-speed weapons capabilities China is developing.

It’s thought that the craft is launched from an H-6 bomber, or at least was for testing.