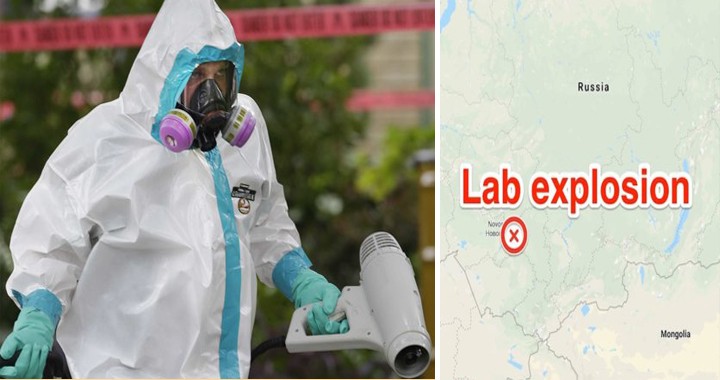 A GAS explosion and ensuing fire has ripped through a Russian “bio-weapons” laboratory where the world’s most infectious viruses are stored. Research lab stores dangerous pathogens including smallpox, Bubonic Plague, anthrax, and Ebola.

The State Research Centre of Virology and Biotechnology has said a cylinder exploded in a lab, which is one of two places in the world to stockpile smallpox.

A gas cylinder exploded in a sanitary inspection room on the fifth floor of the State Research Center of Virology and Biotechnology building in the city of Koltsovo. The lab — also known as “Vector” — confirmed the explosion in a statement.

Some 13 fire engines and 38 firefighters entered the six-story building minutes as it was realised what the possible implications could be.

The explosion led to a fire in an area of about 30 square meters (323 square feet), Radio Free Europe/Radio Liberty (RFE/RL) and the state-run Tass news agency reported.

The room had been undergoing repair work, Vector said, and wasn’t in use at the time of the explosion.

A construction worker was taken to a nearby hospital with third-degree burns, RFE/RL reported. He was taken to intensive care, Tass reported, citing the hospital.

Officials have opened a criminal investigation into lab authorities over the explosion, the Sib.fm news site reported.

There was no biohazardous material in the room when the gas explosion took place, Vector said, as did Koltsovo’s mayor according to RFE/RL. Other pathogens — like smallpox and Ebola — are stored elsewhere in the building.

All the glass in Vector’s building was broken, RFE/RL and Tass both reported. The building structure, however, was unharmed, Vector said.

The explosion poses no biological or any other threat to the surrounding population, Tass cited Koltsovo Mayor Nikolai Krasnikov as saying.

Located in Koltsovo, in the Novosibirsk region of Siberia, the site called the Vector Institute is thought to be where biological weapons were developed.