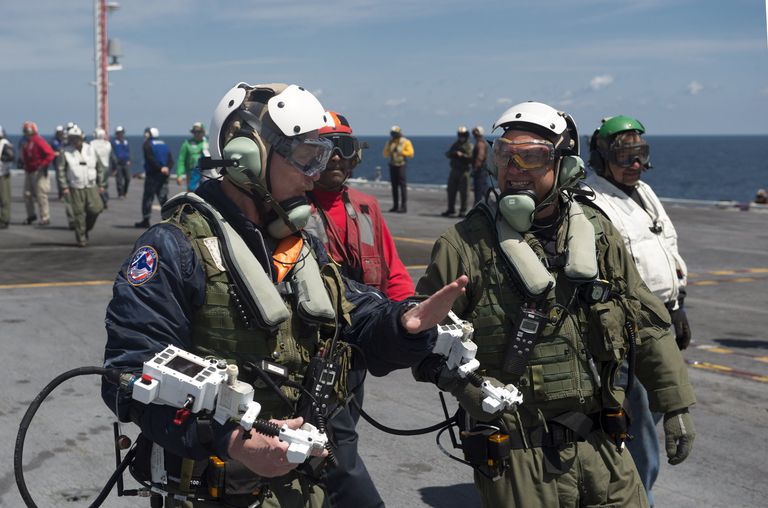 In the below video See how US navy controls X-47B Drone with ‘Cyborg’/ Robotic Arm. In the above video, you can see a Navy deck operator Controlling Northrop Grumman’s X-47B  With a Wireless, handheld device known as Control Display Unit (CDU)

How X-47B Drone is controlled

The battery-powered device uses an RF data link to control nosewheel steering, engine thrust, mainwheel brakes and tailhook and provides a display, keys, and lights to communicate aircraft status to the operator maneuvering the unmanned X-47B on the flight deck.

The operator stands directly behind the “yellow shirt” flight-deck director, both of them looking at the aircraft, and follow the director’s hand signals to maneuver the X-47B.

Using the hand controller, the deck operator will maneuver the X-47B on to the catapult, run up the engine to tension the cat, initiate a control “wipe out” to check the flight-control surfaces are clear and indicate the aircraft is ready to launch, then hand over control to the mission operator below decks.

On landing, once the aircraft has caught the wire, sensed the deceleration and reduced the engine to idle, the deck controller with taking command of the X-47B from the mission operator, raise the hook and maneuver the aircraft off the wire and out of the way of the next to land.

The problem with using a handheld device on a carrier flight deck is that the deck is constantly changing, with aircraft and vehicles constantly moving around and posing a potential hazard. 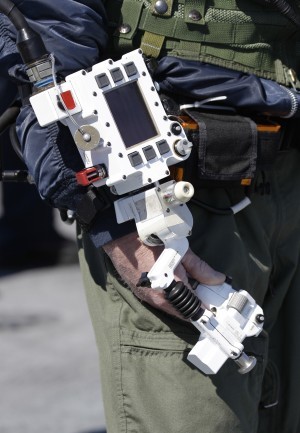