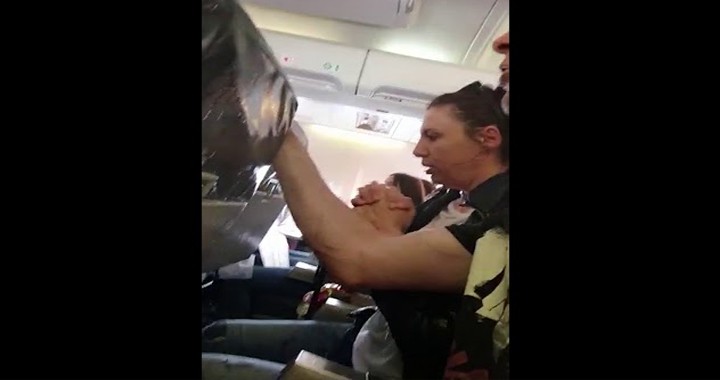 A terribly scary video of turbulence hitting a plane from Pristina in Kosovo to Basel in Switzerland has gone viral. The turbulence sent a flight attendant crashing into the ceiling and left 10 passengers injured.

A downright scary 30-second video went viral on social media on, showing a flight attendant’s drinks cart hit the ceiling, with its contents spilling all over passengers.

A lady was also captured praying on the flight, as turbulence hit the plane.

In the horror that ensued on board, some passengers also said that they were burnt by hot water from the drinks cart.

Passengers were terrified as the plane is seen shaking violently, with the pilot trying to reassure them over the intercom.

Seats were seen torn up from the floor, with seatbelts broken and passengers left bleeding.

The video was taken by Mirjeta Basha. She said the turbulence started about 30 minutes after the plane took off, and lasted for five minutes – I imagine it felt like a whole lot longer.

Seatbelts Should be Worn at All Times While The Seatbelt Sign Is On In Case of Slight Turbulence… Or Just Always Wear It!!

During a Flight From Kosovo to Switzerland, Ten People Were Injured Including Burns From Hot Water Off The Cart 🙏#MondayThoughts pic.twitter.com/6DsFLeQ8Rf

In a statement to ABC News, EuroAirport confirmed that 10 passengers of the 121 on board were hospitalized for minor injuries after the plane touched down at the airport in Basel.

“The flight from Pristina with airline ALK experienced turbulence in the air around 20 minutes before landing,” the airport told ABC News. “The pilot alerted handling agents so that the airport firemen were immediately on the scene when the plane arrived.”

Despite reports that seats were ripped from the plane during the 10-minute long turbulence, ALK Airlines, the Bulgarian company that owns the plane, said the plane had a “normal” landing after the incident and no seats were dislodged.

Previous 30 years ago today a Pilotless Soviet MiG-23 Jet Crossed Europe Before Crashing in Belgium
Next Behind the Wings: Dives into the incredible history of the famed F-14 Tomcat