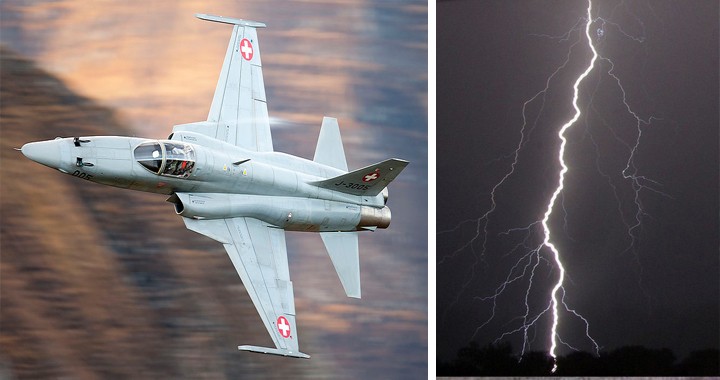 In this article, we will share with you the story of  Swiss Air Force Pilot whose F-5 Tiger was hit in his thigh by lightning that penetrated his fighter jet cockpit

“Having flown two-morning missions during a training session from Dübendorf, I knew that storm-like precipitation and strong turbulence was embedded in an 8’000 meter cloud formation.

“During a lunchtime coffee break, a discussion began on how a lightning strike had penetrated a Tiger’s cockpit and hit the pilot in his thigh just before midday. I had been warned… After an interception mission “on top” at 30’000 feet, we followed a GCA approach in formation through varying cloud densities. While reducing speed before the talk down, we hit strong turbulence and very heavy rain.

“I could hardly make out the outline of my wingman in my mirrors. Just as the first words from the radar operator came in “ten miles long final, gear down”, I felt a heavy blow, as though a hammer hit my left thigh. For a microsecond, I saw a pencil-like vertical streak of lightning in front of me in the cockpit. “Fly the airplane”, I told myself scared, and in the following half a minute it took all my concentration to focus on the instruments to keep within limits. A quick glance around the cockpit confirmed that everything was seemingly OK and when I looked over to my wingman, I was relieved to see that he was still glued to my wingtip as he should be and was nodding his head.

“I reported my status to the operator and we continued the approach without any further issues for a successful landing. My wingman registered his own lightning strike as a hard.. muffled hit, with an impact just above his left eye. Both airplanes had multiple lightning entry and exit points, with rivets that looked like they’d been soldered.

“Right after the flight we were taken to the Air Force Medical Center (FAI) for examination. We both had painful five Franc coin-sized bruises: my wingman’s on his forehead, mine on my thigh. Our bruises may have disappeared within an hour, but that day – March 21, 1986 -has left a mark in both of our memories forever.”