Russia plane with 46 on-board crashes into building during Landing 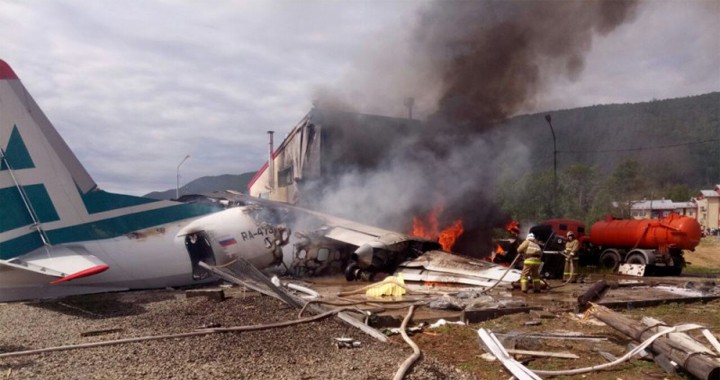 An Antonov An-24RV of Angara Airlines hit a building following a runway excursion on landing at Nizhneangarsk Airport, Russia.

A small passenger plane has skidded off a runway in eastern Siberia, killing two crew members and injuring dozens of passengers.

The aircraft had departed Ulan-Ude for Nizhneangarsk. While en route one of the engines reportedly failed.

During landing rollout on runway 22 at Nizhneangarsk Airport, the aircraft veered off the right side of the runway and traveled across the grass until it impacted a building of a sewage treatment plant. A fire erupted.

Officials said that a pilot with 34 years of experience and a flight mechanic died while the other crew members survived.

The Buryatia governor had previously said both pilots had died.

The aircraft had taken off from the regional capital of Ulan-Ude and flew to Nizhneangarsk, where it was forced to make an emergency landing when one of its engines failed, regional officials said.

“All 43 passengers were promptly evacuated. There were no victims among the passengers,” Angara Airlines said in a statement. The airline appeared only to be referring to deaths.

More than 30 people have been injured, and nine were taken to hospitals with severe burns and other injuries, said Alexei Fishev, spokesman for the local governor.

Angara Airlines Antonov An-24 was destroyed in a runway excursion at Nizhneangarsk Airport, Russia. The aircraft ran off to the right, hit houses and caught fire. Two crew members reported dead. All 42 passengers survived, 7 were injured. #AviationDaily #AvGeek pic.twitter.com/T4kl3HZNKu

Investigators say they have launched a probe into what caused the crash of the An-24 which is a mainstay of Russian aviation.

Angara Airlines is mainly a domestic airliner, primarily for Eastern Siberia, but it does offer an international flight to Manzhouli in northwest China from Irkutsk.