Why electromagnetic Rail-gun is future of military Technology  ?

Following are the Reason why  Railgun is future of military Technology

This current makes the railgun behave as an electromagnet, creating a magnetic field inside the loop formed by the length of the rails up to the position of the armature.

In accordance with the right-hand rule, the magnetic field circulates around each conductor. Since the current is in the opposite direction along each rail, the net magnetic field between the rails (B) is directed at right angles to the plane formed by the central axes of the rails and the armature. In combination with the current (I) in the armature, this produces a Lorentz force which accelerates the projectile along the rails, always out of the loop  and away from the power supply.

There are also Lorentz forces acting on the rails and attempting to push them apart, but since the rails are mounted firmly, they cannot move.

By definition, if a current of one ampere flows in a pair of ideal infinitely long parallel conductors that are separated by a distance of one meter, then the magnitude of the force on each meter of those conductors will be exactly 0.2 micro-newtons.

It also follows that, for railguns with projectile masses of a few kg and barrel lengths of a few m, very large currents will be required to accelerate projectiles to velocities of the order of 1000 m/s.

A very large power supply, providing on the order of one million amperes of current, will create a tremendous force on the projectile, accelerating it to a speed of many kilometres per second (km/s). Although these speeds are possible, the heat generated from the propulsion of the object is enough to erode the rails rapidly.

Under high-use conditions, current railguns would require frequent replacement of the rails, or to use a heat-resistant material that would be conductive enough to produce the same effect.

At this time it is generally acknowledged that it will take major breakthroughs in materials science and related disciplines to produce high-powered railguns capable of firing more than a few shots from a single set of rails. The barrel must withstand these conditions for up to several rounds per minute for thousands of shots without failure or significant degradation. These parameters are well beyond the state of the art in materials science 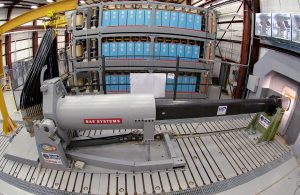