When RAF Phantom shot down an RAF Jaguar

on May 25, 1982 RAF Phantom was scrambled to perform training missions in the low flying areas.

After XV422 scrambled it started a hard turn through 180° to avoid Dutch Airspace and then the crew quickly ran through what they had done hundreds of times before but  the unusual thing was RAF Phantom was scrambled with live weapons but the crew were both experienced air defence operators and thought little of it. In accordance with procedures the navigator pulled the relevant CB and assumed the Phantom was now unable to fire weapons in anger.

“The backseater pulled out his radar and started looking for ‘trade’ (the term for unknown targets) whilst the pilot focused on guiding the aircraft to its designated Combat Air Patrol (CAP) area. Changing frequency they soon established contact with the German GCI known as ‘Crabtree’ and while the pilot was busy navigating the aircraft the navigator in the rear cockpit was unaware that he had made the Master Arm safety switch live.

“Around 35 miles (56km) from base the backseater detected a pair of contacts on his radar and the decision was taken to engage the targets. Normally, for the purpose of evaluation, the engagement would be filmed and the ‘kill’ verified post-flight by looking at the navigator’s radar camera. This recorded the target’s range and the moment of trigger press by an event marker.

“On this occasion, the pilot quickly identified the targets as a pair of RAF SEPECAT Jaguars which had fortuitously pulled up to around 1,000ft as they approached their base at the end of a mission and were focusing on their recovery checks.”

As the Phantom crew started to turn towards the Jaguars, the latter’s pilots saw the fighter but being low on fuel they chose not to engage in a dogfight. However, moments after Steve Griggs, the pilot of the second of the two Jaguars (XX963/AL) saw Phantom XV422 pass behind his aircraft there was a loud explosion and the Jaguar rapidly lost control.

Black: “Assuming some sort of catastrophic failure the Jaguar pilot instinctively pulled the lower Martin-Baker ejector seat handle and swiftly found himself in a field 50 miles from base, while his aircraft crashed onto open farmland.”

So how did the Phantom crew inadvertently shoot down Griggs’ Jaguar?

According to Black “the Phantom navigator is adamant that he had pulled the vital CB to render XV422’s weapon system inert – but there was a catch. The bank of CBs was located on the right hand wall of the rear cockpit and it is very possible that under ‘G’ his leg may have been pushed against the wall causing the CB to pop back in. In fact, after landing XV422 was impounded and the engineers found that the CB was faulty – it only needed to be pushed in slightly and contact was re made.

“So how did the pilot forget that he had live missiles? Training was relentless during the Cold War, to such extent that actions became autonomous. But what about the cross of white tape applied to Master Arm switch? Shouldn’t this have made it impossible to physically squeeze the trigger and fire the missile? It would have done – but for some unknown reason the tape was not applied to XV422. Finally, the GCI controller was not told the aircraft was ‘live armed’ and therefore didn’t remind the crew to perform this vital check.That time a RAF Phantom shot down a RAF Jaguar: the unknown story of the British Phantom’s only air-to-air kill

“At a lengthy and public board of enquiry the blame fell squarely on the crew who had pulled the trigger and achieved the RAF’s only air-to-air kill with the mighty FGR.2. Both crew were found to be guilty and punished, though both continued to fly fighters.

“A breakdown of safety checks led to the pilot getting the ‘growl’ in his headset, squeezing his trigger…and getting the ‘Kill’.”

In the spirit of the RAF’s macabre sense of humour Phantom FGR.2 XV422 received nose art depicting a Jaguar GR.1 silhouette with the title “Jag Killer” underneath which the aircraft wore until it was scrapped in 1998. 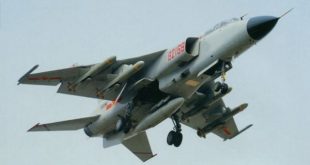 Is The Chinese JH-7 Fighter-Bomber An Answer To The PAF Deep Strike Needs?

Credits: Unknown Via Airrecognition.com The dominant requirement for deep attack in a major regional conflict …