U.S. claims that Iran tried to Shoot Down U.S. Reaper Drone prior to oil tanker attack 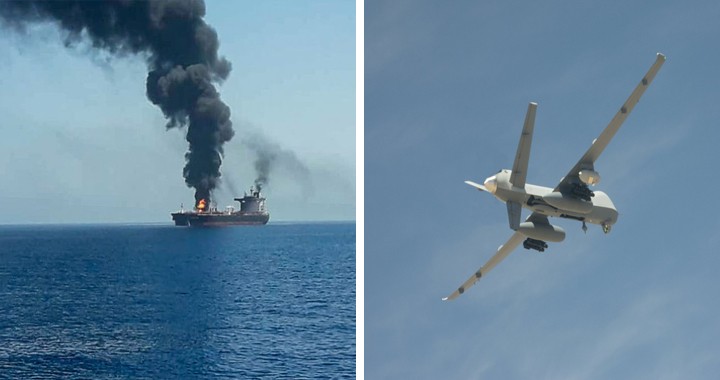 US official told CNN that In the hours before the attack on the two tankers in the Gulf of Oman on Thursday, the Iranians spotted a US drone flying overhead and launched a surface-to-air missile at the unmanned aircraft.

on June 13, 2019, Two Oil Tankers was set on fire off the coast of Iran after an apparent torpedo attack

IRAN launched a surface-to-air missile to shoot down the US MQ-9 Reaper drone as it monitored the region – but missed.

CNN was first to report the new details, citing an unnamed U.S. government official, on June 14, 2019. The source described the weapon the Iranian’s employed as a “missile,” but did not specify what type. They added that it had missed the drone and fallen into the ocean. They did not say whether or not the unmanned aircraft had subsequently observed the Iranians conducting any actual attacks on the Front Altair or a second tanker, the Kokuka Courageous.

The rocket plummeted harmlessly to the water below – allowing the drone’s operators to spot Iranian ships approaching the oil tankers, the sources told CNN.

But an Iranian missile fired by its proxy Houthi rebels downed a different US Reaper drone over the Red Sea just days ago, the same anonymous official revealed.

If it’s true, this latest altercation is still evidence of a significant escalation in tensions between the United States and Iran, which have been growing steadily since the beginning of May 2019. It would also be an indication of the additional evidence the U.S. government has to substantiate its claims that Iran was involved in the attacks on Front Altair and Kokuka Courageous.

CENTCOM has already released pictures of what it says is a likely dud limpet mine attached to the hull of the Kokuka Courageous, as well as a video showing Iranian forces returning to the ship to recover it hours after the attack. Japanese shipping company Kokuka Sangyo, which owns this tanker, has disputed these assertions, saying that it heard from the crew that the ship came under attack by “flying objects.”

“Iran did do it and you know they did it because you saw the boat,” he said, appearing to refer to the images and video released by the Pentagon late Thursday.

In the video, a smaller boat is shown coming up to the side of the Japanese-owned tanker. An individual stands up on the bow of the boat and can be seen removing an object from the tanker’s hull. The US says that object is likely an unexploded mine.

Though Iran continues to deny any involvement in the attacks, the amount of contradicting evidence only seems to be growing by the day. If this latest report proves accurate, it would add substantial weight to the case against them.