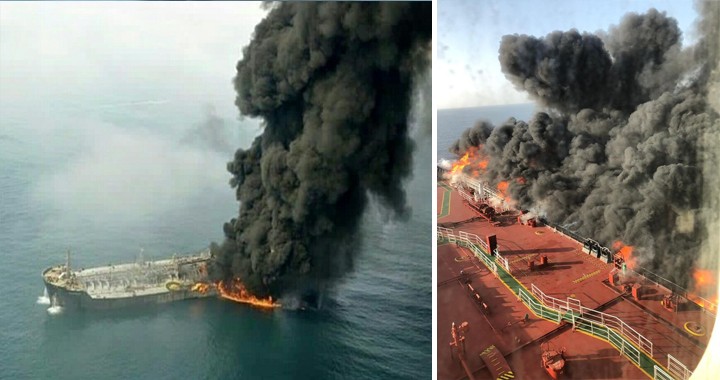 A huge oil tanker turned into a fireball after a suspected torpedo attack off the coast of Iran.

A second tanker was said to have been targeted by a magnetic mine in a “suspicious” series of explosions.

The huge vessels – identified as the Front Altair and Kokuka Courageous ships – were evacuated and the alleged attack prompted a surge in crude oil prices.

Incredible photos from on board the Front Altair show a huge fireball and black smoke billowing from the side of the vessel. The Front Altair, which was carrying crude oil, is believed to have been struck by the torpedo – and reports in Iran claim it later sank.

Dramatic images from the huge oil tanker that has reportedly been torpedoed in an attack off the coast of Iranhttps://t.co/eDhsLjo3Dv pic.twitter.com/pKWRrsxWXr

A Huge fire rages on board the #Norwegian-owned oil tanker MT Front Altair after it was hit by an explosion in the #Gulf of #Oman today, in what has been described as a torpedo attack. #Iran #Saudi #UAE #USA pic.twitter.com/UBBInlQSsk

But minutes later shipping firm Frontline, owner of the vessel, denied reports and claimed it was still afloat.

Reports emerged that two tankers were damaged near the Strait of Hormuz. It comes at a time of heightened tensions in the Middle East and just a month after four vessels were affected in a similar incident off the Emirati coast.

Iran’s Foreign Minister Mohammad Javad Zarif has seemingly hinted that Thursday’s reported an attack on two tankers in the Gulf of Oman had something to do with Japan’s efforts to advance the peace process in the Middle East.

“‘Suspicious’ doesn’t begin to describe what likely transpired this morning,” he added.

Reported attacks on Japan-related tankers occurred while PM @AbeShinzo was meeting with Ayatollah @khamenei_ir for extensive and friendly talks.

Suspicious doesn't begin to describe what likely transpired this morning.

Iran’s government spokesman, Ali Rabei, said Tehran was ready for regional cooperation to ensure the security of strategic waterways. “All countries in the region should be careful not to fall in the trap of those who benefit from regional insecurity,” he said.

No casualties have been reported; the Bahrain-based US Navy 5th Fleet said it was assisting the tanker, while Iranian rescuers, according to local media, have saved and transported 44 crew members to an Iranian port.

Meanwhile, Japanese Prime Minister Shinzo Abe is visiting Iran as part of his effort to reduce tensions between the Islamic Republic and the United States. Abe noted on Wednesday that he and Iranian President Rouhani had ‘bluntly discussed’ how to reduce Iran-US tensions.

A similar yet-unsolved incident took place in the Gulf of Oman in mid-May, when four commercial vessels − among them two Saudi oil tankers − were damaged by limpet mines. UAE investigators blamed the attack on a “state actor” but failed to identify the culprit.

The United States, which is embroiled in an escalating war of words with Iran, was quick to accuse the Islamic Republic of orchestrating the attack, which the latter denied.