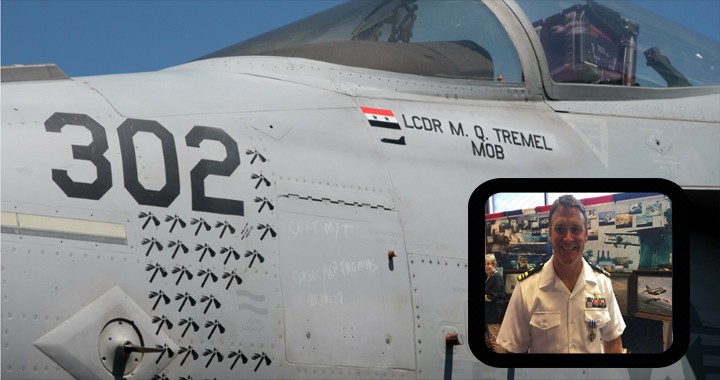 He was flying the F/A-18E ‘AJ302’ BuNo. 168914 (whose modex has apparently been changed from 304 to 302) when he downed the Fitter near Tabqah, 20 miles west of Raqqa, after that the attack aircraft had dropped bombs near the U.S. backed forces, in the form of the Syrian Democratic Forces (SDF). The Super Hornet features the kill mark of the air to air victory under the cockpit canopy too.

Noteworthy this Su-22 shot down represented the first air-to-air kill scored by a U.S. Navy aircraft since Operation Desert Storm (ODS). During ODS, in fact, two F/A-18C Hornets belonging to VFA-81 Sunliners downed two Iraqis Chengdu F-7As (the chinese version of the MiG-21 Fishbed) on Jan. 17, 1991, and an F-14A Tomcat from VF-1 Wolfpack shot down an Iraqi Mi-8 helicopter on Feb. 6, 1991.

At 2017 annual Tailhook Association symposium, the Navy pilot who shot down the Sukhoi Su-22, Lt. Cmdr. Michael “Mob” Tremel, discussed the dogfight. Tremel and three other pilots who were flying an air-support mission that day were guest speakers at the Sept. 10 event, which was attended by current and former Navy aviators.

On June 18, Tremel and his wingman, Lt. Cmdr. Jeff “Jo Jo” Krueger, launched for their close-air support sortie over Syria, months after the U.S. Tomahawk missile strike on a Syrian airfield and weeks after an Air Force F-15E shot down an Iranian drone over southern Syria. The situation on the ground — and in the air — was growing complicated and dangerous.

“The whole mission out there that day was to go defeat ISIS and annihilate ISIS,” Tremmel said. “If at any point in time that day it had escalated, that would have been fine by us.”

But it didn’t play out that way.

As the F/A-18s came on station over U.S.-backed forces, they spotted a Syrian Su-22 approaching ground forces, carrying ordnance.

Repeated radio calls to the Su-22, a Cold War-era attack jet designed to strike targets on the ground, went unheeded.

Tremel “thumped” the aircraft three times — which means flying over the jet and popping flares — the warnings were ignored. As the Su-22 came within striking distance and began to dive, it released its ordinance, which landed near U.S.-backed Syrian Democratic Forces.

Tremel — cleared under the rules of engagement — locked onto the Su-22 with an AIM-9X Sidewinder and fired, but the Sukhoi popped flares. “I lose the smoke trail and I have no idea what happened at that time,” Tremel said at the symposium. Despite the venerable Sidewinder’s rep as a highly advanced piece of ordnance, the infrared-guided missile was drawn away by flares.

The enemy bird was still in the air and still a threat to friendly forces on the ground, so it was time to “try something different,” Tremel recounted.

He switched to the slightly slower-to-arm, radar-guided AIM-120 AMRAAM, and cut loose with one.

The AMRAAM struck the rear of the Su-22 and exploded. As the aircraft pitched and then plummeted to the earth, the pilot ejected 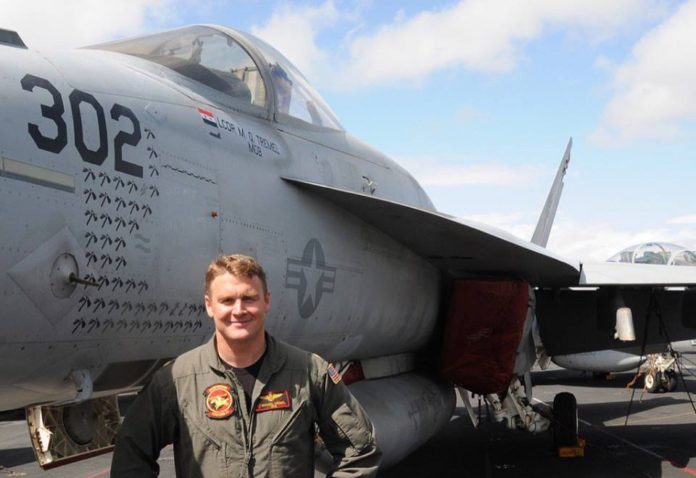 . Tremel quickly rolled away from the explosion to avoid flying through it, adding that by the end of the sortie “I know I was just operating on brainstem power.”

Even though he had just scored the United States’ first air-to-air kill in 18 years, after Tremel made it back to the carrier, business continued as usual.

In his case, that meant Tremel’s CO reminding him he was the air-wing duty safety officer that day, Tremel said at the symposium. “The show goes on,” he added, with a laugh. 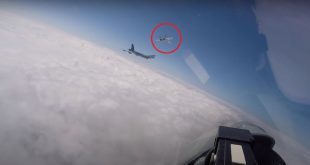 A composite image that includes screenshots of the B-52, P-3C, and Sentinel R1 intercepted by …