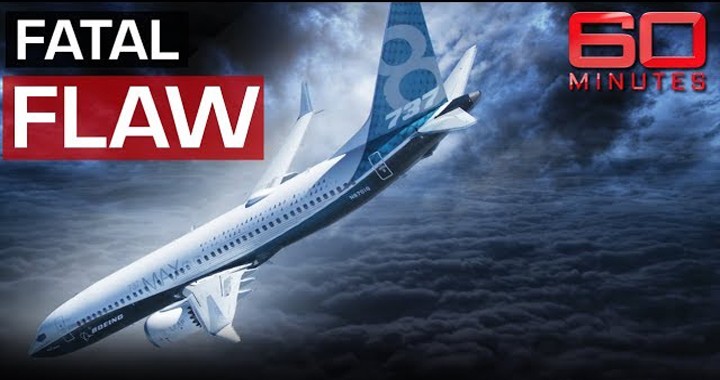 Two Boeing airplanes have fallen out of the air and crashed in the past six months. On the surface, this is a technical failure. But the real story is about a company’s desire to beat their rival.

In the Documentary Liz Hayes investigates the disaster of Boeing’s 737 MAX jetliner. Why two supposedly state-of-the-art and safe planes crashed killing 346 people; why pilots now fear flying the 737 MAX; & whether Boeing could have averted the catastrophes.

Attention quickly focused on the 737 MAX’s newly introduced Maneuvering Characteristics Augmentation System (MCAS), which automatically lowers the nose of the aircraft when sensors indicate that a stall may be imminent.

Satellite tracking data showed that after takeoff, both aircraft experienced extreme fluctuations in vertical speed. Pilots in both aircraft radioed they had flight control problems and wanted to return to the airport.

While the airplanes are out of service, Boeing had been developing and evaluating a software fix to the MCAS that is subject to review by a panel of global aviation regulators.

The optional safety features – an angle of attack indicator and a disagree light – are not mandated by the Federal Aviation Administration and are currently only installed if the airline pays for the add-ons.

Both upgrades were related to the plane’s angle of attack sensors, devices that read whether a jet’s nose is pointing up or down relative to oncoming air. One upgrade, called the angle of attack indicator, displayed the sensors’ readings; the other upgrade is a light that is activated if the sensors interfere with each other. The disagree light alone cost $80,000, according to CBS; the jet’s list price is roughly $120 million.

These features are considered optional and aren’t required by most airline regulators — but, according to the Times report, they could have helped the planes’ pilots realize something was amiss earlier, and some flight safety experts say they never should have been optional in the first place. “They’re critical, and cost almost nothing for the airlines to install,” Bjorn Fehrm, an analyst at the aviation consultancy firm Leeham, told the Times. “Boeing charges for them because it can. But they’re vital for safety.”

The U.S. Department of Transportation (DOT) Inspector General opened an investigation into the FAA’s approval of the Boeing 737 MAX aircraft series; the probe focuses on potential failures in the FAA’s safety-review and certification process. The day after the Ethiopian Airlines crash, a federal grand jury issued a subpoena on behalf of the U.S. Justice Department for documents related to the development of the 737 MAX.

As investigators look into the cause of the crashes, attention has turned to new software in the jets that takes readings from devices called angle of attack sensors. The software can essentially push a plane’s nose down in some circumstances, for example when the sensors suggest the plane may be stalling.