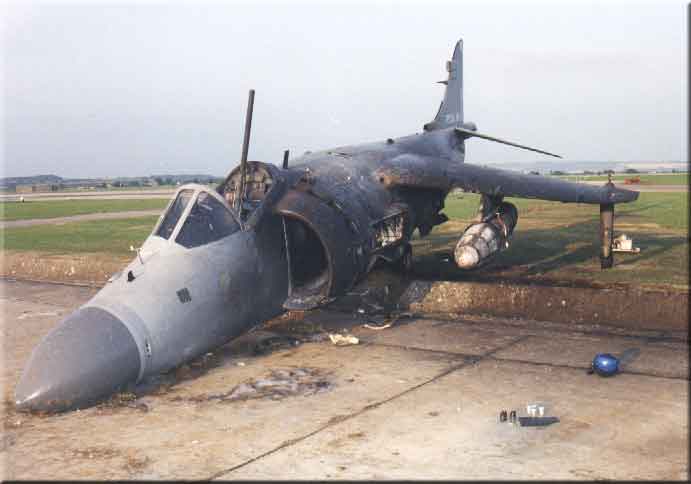 A vertical take-off and landing (VTOL) aircraft is one that can hover, take off, and land vertically.

This classification can include a variety of types of aircraft including fixed-wing aircraft as well as helicopters and other aircraft with powered rotors, such as cyclogyros/cyclo copters and tilt-rotors.

Others, such as some helicopters, can only operate by VTOL, due to the aircraft lacking landing gear that can handle horizontal motion. VTOL is a subset of V/STOL (vertical and/or short take-off and landing).

Footage of the famous RAF Harrier GR-7 crash during the second day of the 2002 Lowestoft Air Festival.

The good news was the pilot ejected safely (but breaking his ankle when unfortunately landing on his crashed plane) and the £35m jet was recovered six days later, also shown on the video.

The Yak-41 is a supersonic V/STOL (Vertical/Short Take-Off and Landing) naval fighter. Although it never entered operational service, some of its advanced technology will see the application on Lockheed-Martin’s F-35 fighter.

The Lockheed XV-4 Hummingbird (originally designated VZ-10) was a U.S. Army project to demonstrate the feasibility of using VTOL for a surveillance aircraft carrying target-acquisition and sensory equipment.

It was designed and built by the Lockheed Corporation in the 1960s, one of many attempts to produce a V/STOL vertical takeoff/landing jet. Both prototype aircraft were destroyed in accidents.

The Yakovlev Yak-38 was the Soviet Naval Aviation’s only operational VTOL strike fighter aircraft
In addition to being its first operational carrier-based fixed-wing aircraft.
It was developed specifically for and served almost exclusively on the Kiev-class aircraft carriers.
Image Credits: firevl.tripod
Share