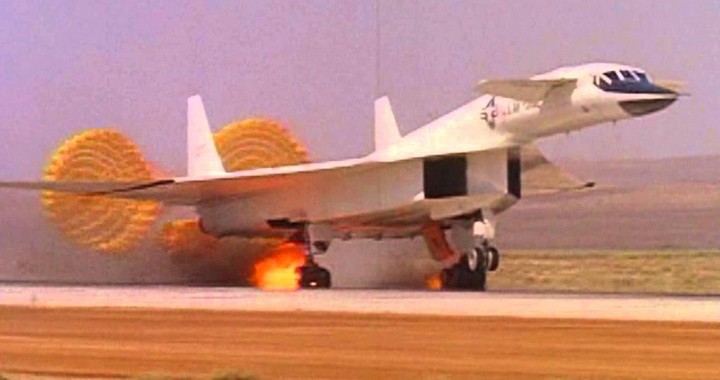 On Apr. 30, 1966, the second XB-70 prototype, the Air Vehicle 2 (AV 2), suffered a short-circuit in the landing gear retraction system shortly after the take-off from Edwards Air Force Base.

As a result of this malfunction, the nose gear was blown back into the partially retracted gear well door and the tires were slashed.

Al White and Joe Cotton, who were the XB-70 aircrew for the mission, attempted to lower the gear but the normal hydraulic system failed.

As described by Graham Simmons in his book Valkyrie:

The North American XB-70, White performed a touch and go, thinking that a hard impact on the main landing gear would have unlocked and extended the loose nose gear in the correct landing position.

But after two failed attempts, the aircrew had the only option to bail out and lose the bomber.

Fortunately, the aircraft had fuel to burn and White and Cotton circled around Edwards for more than two hours giving the chance to the engineers on the ground to determine that the problem with the backup system was caused by a circuit breaker malfunction.

The only way to extend the nose landing gear and prevent White and Cotton from being forced to eject was to short-circuit the unit, but the aircrew hadn’t any toolkit on board that would have made the things easy.

Until Cotton came out with an extreme solution. He opened his briefcase and among his notes and plans he found a binder-type paperclip: he grasped the paperclip, carefully reached in and short-circuited the breaker.

The malfunction caused hydraulic pressure to remain on three of the four main wheel brakes which, being locked when the XB-70 landed at 173 knots, led to the burn up of the Valkyrie main landing gear tires.

However, any serious damage to the aircraft was avoided thanks to the Edwards firefighters and the AV 2 was able to fly again two weeks later.

In the following impressive video, you can see the successful emergency landing performed by the aircrew after two tense hours of flying.