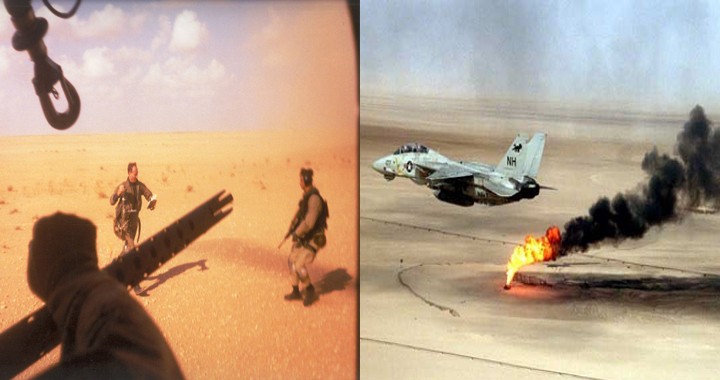 In the first hours of the morning of the fourth day of Operation Desert Storm, while Jones and Slade were returning to the USS Saratoga (CV-60), after a successful EA-6B escort mission their F-14 tomcat was shot down by an Iraqi SAM (Surface to Air Missile)

On their way back to the aircraft carrier, Jones and Slade spotted a SAM coming through the clouds. Jones added power and started an evasive action, but the missile exploded near the Tomcat’s tail.

The aircraft entered into an unstoppable spin which forced the aircrew to eject.

Lt. Slade, Slate 46 RIO, was captured by Iraqi armed forces he endured interrogation, torture, and starvation in the Iraqi hands for 43 days.

On the other hand, a combat rescue mission was launched to rescue Lt. Devon Jones 130 miles into Iraq.

Related Article: The story of the rescue of Current CSAF General David L. Goldfein after his F-16 was shot down 20 years ago

Here are details of the Rescue mission of Lt. Devon Jones from the David Donald and Stan Morse book Gulf Air War Debrief

Once landed, Lt. Devon Jones started to walk towards what he thought to be west, trying to reach the Saudi border, but when he saw the sun rising, he realized his mistake.

Nevertheless, at that point, Jones thought it was good he was quite far from the crash site.

After he had been down for about six hours, at 12:05 local time, he tried his radio again. And someone responded to his call.

‘Slate 46, how do you read?’ That was the first time that I knew that there had been an ongoing SAR effort. […] ‘Let me come a little closer so I can talk to you’ he said.”

Still, Jones didn’t know who was the guy that responded to his call when he came to the radio telling Jones that he would release a flare.

Since he was thinking to talk with a helicopter, Jones was surprised when the pilot revealed to him that he was flying an aircraft

“ ‘Ok, now, I’ll come down to where you can see me,’ he said. Lo and behold, he was an A-10! He was Sandy 57, like those guys in Vietnam, trained in combat SAR. I brought him with standard aviator talk.

He didn’t see me, but he flew right over me at 50-100 feet and dropped a waypoint in his INS (Inertial Navigation System). ‘I’ve got to get some gas,’ he called. ‘Minimize your transmissions and come back up in 30 minutes.’

The Sandy pilot directed the helicopters toward Lt. Jones. As the SAR force headed for the downed Naval Aviator, they heard MiGs being vectored toward them.

After they got their gas, the A-10s returned, caught up with the helicopters and brought them in. After that a farmer truck passed nearby Jones, finally, the F-14 pilot heard the A-10s telling to the helicopters they were 30 miles from his position. They asked him to shine his signal mirror south and after Jones did it, one of the A-10s told him to look for a helicopter 15 miles out, but he saw only the A-10s flying in a circle and Jones gave them instructions to his position.

But since the Iraqis were listening to their communications, while the planes came in, half a mile down the south road, Jones saw an army truck. After a moment of panic, he remembered that the A-10s, as well as the helicopters, were heavily armed and, in fact, within 3-4 seconds, the Sandys opened fire with their 30 mm cannons, destroying the enemy truck.

Then for the first time, he saw a helicopter “I had never seen such a beautiful sight as that big, brown American H-53. […]

I grabbed my kneeboard cards and gear as he landed about 20 yards away. One of the special forces guys jumped out and waved me on. I jumped in and off we went, 140 miles to go at 140 knots, at 20 feet! Pretty impressive machine. Just what you’d expect from these special forces people with lots of guns hanging off them.”

Here is the image of Lt. Devon Jones rescue 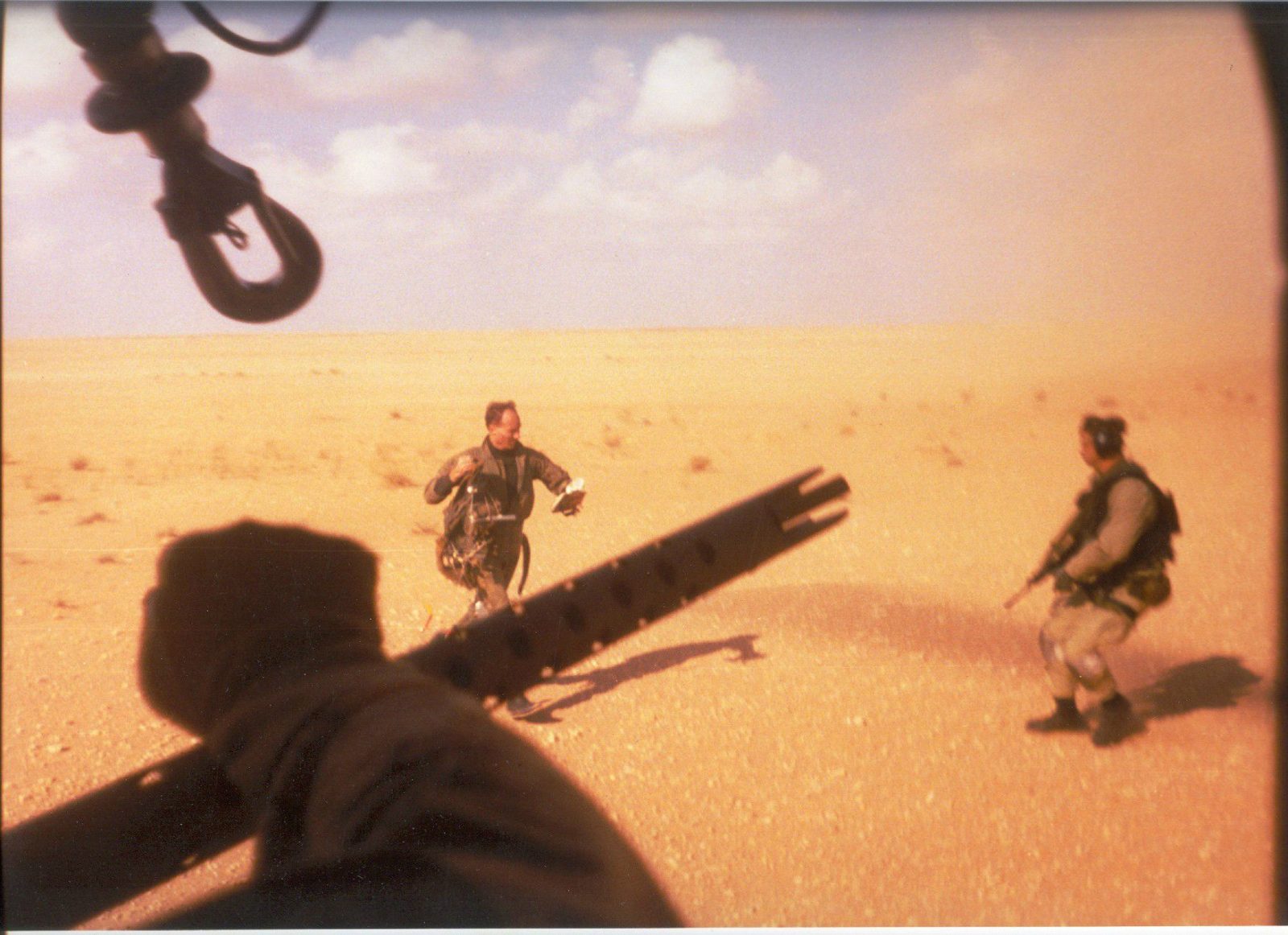 The image above was taken from an MH-53J from the 20th Special Operations Squadron, piloted by Capt. Thomas Trask, during the first Combat SAR (Search And Rescue) mission behind the enemy lines since Vietnam.

Lt. Jones was brought to a forward base in Saudi Arabia, where he was hospitalized for a brief medical exam, then the next day an S-3 from his carrier flew him back to his squadron. Following a three-day rest, he returned to the cockpit. 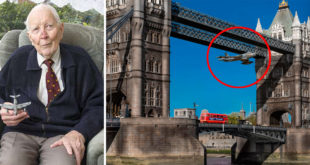 The so called Hawker Hunter Tower Bridge incident occurred on Apr. 5, 1968 when Royal …