A sonic boom is a loud sound kind of like an explosion. It’s caused by shock waves created by any object that travels through the air faster than the speed of sound. Sonic booms create huge amounts of sound energy.

The incident forced the Pakistan Air Force to scramble its US-built F-16 fighters to intercept the intruder, but in vain. The Indian Air Force aircraft that did the deed was a reconnaissance variant of the MiG-25, then the heaviest fighter-category aircraft in India and the fastest ever.

Veteran journalist Amit Baruah recounted the incident of the MiG-25 sonic boom over Islamabad in his book Dateline Islamabad, which chronicles his experiences while posted in Pakistan.

In the book, Baruah writes, “On May 27 (1997), I rushed out of the house as a series of ‘explosions’ were heard.” Baruah notes that the Pakistan Air Force identified the intruder as a MiG-25 of the Indian Air Force.

“The Pakistanis, I was told, could do nothing as that aircraft flew at a height of 60,000 feet. There was nothing in the Pakistan Air Force (not even the F-16) that could come close to the height at which the MiG-25R flew,” Baruah writes.

The MiG-25, which had the NATO codename Foxbat, struck fear in the West when it was unveiled in 1967. While the MiG-25 was not designed to be an ‘agile’ dogfighter that could turn deftly, it spurred the development of a new generation of US fighters in the early 1970s like the F-15 and F-16, which are still being built.

The Indian Air Force has been a prolific user of aircraft of the Russian MiG design bureau, starting with the MiG-21. Of all MiGs used by the Indian Air Force, the MiG-25 fleet was the smallest in size and served only one purpose: Reconnaissance. Given its sensitive purpose, the MiG-25 fleet has had a secretive history, with little known about its exploits across the borders with China and Pakistan.

The Indian Air Force retired the MiG-25 in 2006 as the type’s maintenance costs increased and more advanced forms of surveillance were available, such as satellites, UAVs and long-range digital equipment. All of these new means of surveillance either offered greater endurance than the MiG-25 or more accurate and real-time imagery, unlike the older analogue cameras on the Soviet-built aircraft.

However, when in service, the MiG-25 offered unique capabilities to the Indian Air Force.

“These aircraft can map a country the size of Pakistan in a single-digit number of missions,” an Indian Air Force officer told The Indian Express at the phasing-out ceremony of the MiG-25 in 2006. Another Indian Air Force officer claimed, “”From the height at which we fly, you can see the entire Himalayan range at one go. No aircraft has ever been able to achieve for us what the Foxbat has. We will miss flying them.” 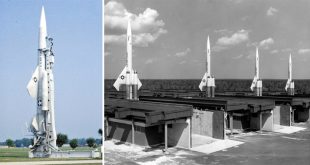 BOMARC Missile Accident: 60 Years Ago Today A Nuclear Missile Was Exploded At U.S Air Force Base

The BOMARC missile (Photo: U.S. Air Force) At the height of the Cold War, the …