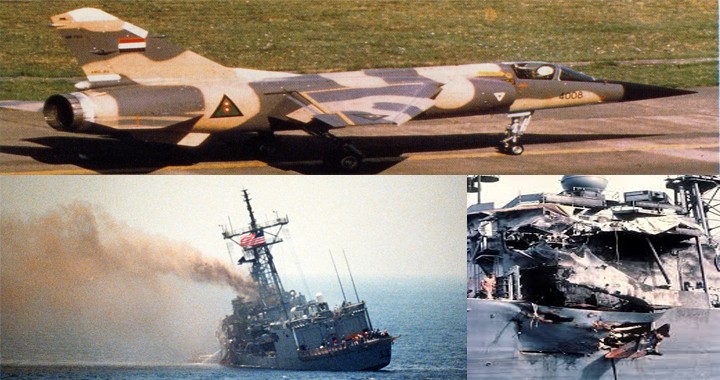 On May 17, 1987, the U.S. Navy guided-missile frigate USS Stark was on a patrol in the central Persian Gulf

At night, Stark came under attack from an apparent Iraqi Air Force jet Aircraft. An Iraqi pilot attacked USS Stark in a Dassault Falcon 50 modified business jet armed. American Intelligence was convinced the attack was made with a Dassault Mirage F1, even though the Mirage did not have the capability at the time.

The Falcon took off from the airbase of Shaibah and headed south into the Persian Gulf also along the coast.

Radars on the U.S. warship tracked the aircraft as it approached, and Capt. Glenn R. Brindel ordered his radioman to issue a warning and request the pilot to identify himself.

The Iraqi did not respond. Instead, he approached to a range of 35 kilometers and fired two Aerospatiale AM.39 Exocet anti-ship missiles. (The first Exocet missile was fired 22 miles (35 km) from the ship, and the second Exocet was fired from 15 miles (24 km). The pilot then banked left and began to withdraw.

The AWACS plane was still in the area and just after witnessing the attack, radioed a nearby Saudi airbase to send aircraft for an interception, but the ground controllers did not have the authority to order a sortie and the Iraqi jet left unharmed. The USN rules of engagement applicable at the time allowed Stark to defend herself after sufficiently warning the hostile aircraft 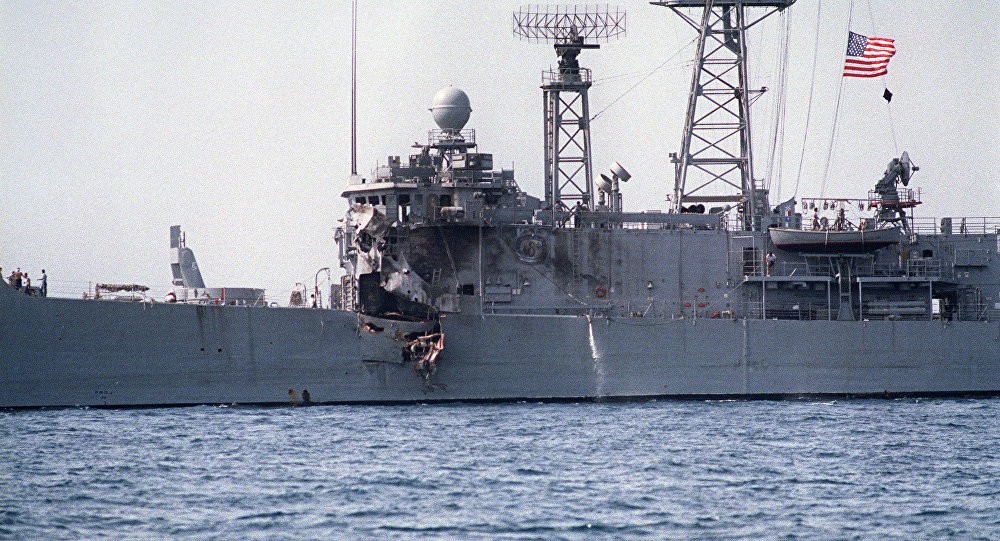 Stark’s radars failed to detect the incoming missiles and thus the crew realized much too late that it was under fire. Underway at an altitude of only three meters and guided by their relatively simple active-radar homing heads, both missiles aimed for the part of the ship with the highest radar cross-section.

The first penetrated the hull directly under the bridge. It failed to explode but its unspent rocket fuel ignited and sparked a raging fire. The second Exocet hit almost the same spot and detonated, tearing a three-meter by 4.6-meter hole in the hull.

Combined, the two missiles inflicted massive damage and ignited a conflagration that burned for almost 24 hours. In order to prevent his ship from sinking, Brindel ordered the flooding of the starboard side of the ship, thus keeping the hole on the port side above water.

Supported by the destroyers USS Waddell and USS Conyngham, the ship barely managed to reach the port of Manama in Bahrain the next day. The destroyer tender USS Acadia affected temporary repairs.

Twenty-nine U.S. Navy personnel died in the initial explosion and fire, two of whom were lost at sea. Eight others died of their injuries, while 21 were injured. The Navy’s incident review board relieved Brindel of command and recommended him for court-martial. Eventually, he received non-judicial punishment and retired early.

How could it happen that an Iraqi aircraft attacked Stark, and what could have been the motives and orders of the pilot, have remained unclear ever since?

Baghdad claimed that the warship was underway within what it declared a war-zone but subsequently apologized, anyway. “The pilot mistook Stark for an Iranian tanker,” the Iraqi government stated.

While not entirely trusting this version, the U.S. government never punished Iraq for the attack — Washington accepted the apology and actually assigned blame to the Iranians, instead. Official attempts to meet and interview the pilot that flew the attack failed, despite Saddam Hussein’s promises of full access.’

Washington used the incident to pressure Iran, which it later blamed for the whole situation. President Reagan said “We’ve never considered them  hostile at all”, and “the villain in the piece is Iran”

On 21 June 2011, an agreement was reached between the governments of the United States and Iraq regarding claims of United States citizens against the regime of Saddam Hussein. The Iraqi government established a fund of $400 million to compensate prisoners of war and hostages in the Persian Gulf War, and those killed or injured in the 1987 attack on Stark. The U.S. Department of State is establishing a mechanism to process applications for compensation.

Previous Algerian local upgrading of Russian BTR80 Seen on Sakhr 2018 live fire exercise
Next Who is Buying F-35s? Here are the Countries Where F-35 Sales Are Taking Off