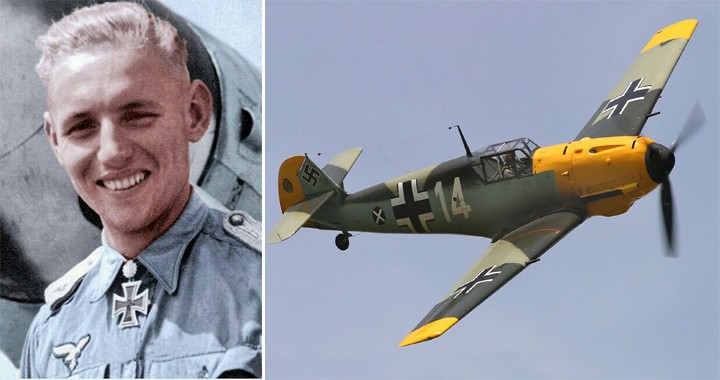 Erich Alfred Hartmann (19 April 1922 – 20 September 1993) was a German fighter pilot during World War II and the most successful fighter ace in the history of aerial warfare.

He flew 1,404 combat missions and participated in aerial combat on 825 separate occasions.

He was credited with shooting down 352 Allied aircraft—350 Soviet and two American—while serving with the Luftwaffe. During the course of his career, Hartmann was forced to crash-land his fighter 16 times due to either damage received from parts of enemy aircraft he had just shot down or mechanical failure.

More than 40 years ago, he was known to his countrymen as “the Blond Knight of Germany” and to the opposing Soviet pilots on the Eastern Front as “the Black Devil of the South” because of the black-painted nose of his Messerschmitt 109.

Hartmann achieved his 352nd and last aerial victory at midday on 8 May 1945, hours before the German surrender. Along with the remainder of JG 52, he surrendered to United States Army forces and was turned over to the Red Army.

In an attempt to pressure him into service with the Soviet-friendly East German National People’s Army, he was tried on war crimes charges and convicted. He was initially sentenced to 20 years of imprisonment, later increased to 25 years, and spent 10 years in various Soviet prison camps and gulags until he was released in 1955. In 1997, the Russian Federation (posthumously) relieved him of all charges.

In 1956, Hartmann joined the newly established West German Air Force in the Bundeswehr and became the first Geschwaderkommodore of Jagdgeschwader 71 “Richthofen”.

He was retired in 1970, due to his opposition to the procurement of the F-104 Starfighter. In his later years, after his military career had ended, he became a civilian flight instructor.

For his aerial feats, he was awarded the Knight’s Cross of the Iron Cross with Oak Leaves, Swords and Diamonds by Adolf Hitler, and for that same prowess in the skies, he was imprisoned for 10 1/2 years by the Soviets at the end of the war.

To appreciate Hartmann’s record of 352 confirmed aerial kills, it is necessary to remember that the top American ace of World War II, Maj. Richard Bong shot down 40 enemy planes, and that the leading British pilot, the RAF’s James E. Johnson, was credited with destroying 38 German aircraft. The World War I ace, Baron Manfred von Richthofen, the Red Baron of Germany, shot down 80 enemy planes, and the highest U.S. scorer in that conflict, Capt. Eddie Rickenbacker scored 26 kills.

Immediately after World War II, some Allied critics suggested that the German pilots on the Eastern Front had deliberately miscounted their kills–that, among other things, squadron commanders took credit for all the planes shot down by their pilots. Some critics also said the Germans were matched against vastly inferior aviators and planes.

But, later, such respected military historians as retired Air Force Col. Raymond F. Toliver and Trevor J. Constable detailed the meticulous accounting methods of the Luftwaffe and declared that German aerial victories appear to have been genuine.