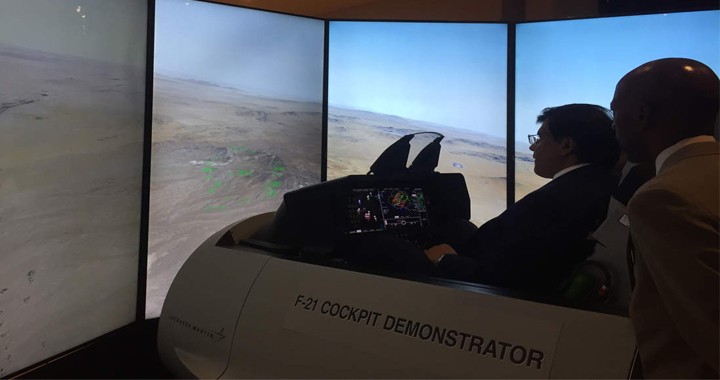 Flight Lieutenant Avani Chaturvedi was among some of the IAF fighter pilots who examined the F-21’s Cockpit Demonstration Simulator (CDS). Some of the pilots told ET that they ‘assessed’ the CDS and ‘it was good’, while others felt that they had a ‘mediocre’ experience with it. Questions were sent to the IAF on the matter, but it didn’t officially respond.

“Lockheed Martin sent the invite to the Air Headquarters and some of us pilots were sent here. Coming here to examine the CDS was an exhibition of sorts. It was to build awareness about the aircraft. We assessed the CDS and it was good,” said a pilot, on condition of anonymity.

“The CDS gave us a feel of the F-21. Taking off and landing the aircraft was just one part of the flying. This was just to see how the aircraft is and how it functions. Following this, there will be many more assessments. Emerging technologies are always welcome,” said another pilot.

Another pilot, however, said that his experience of the CDS was ‘ok’. “We have the same technology, as far as simulators are concerned. What they have is old,” he said.

The CDS was being examined on the sidelines of the third annual industry supplier conference hosted here by Lockheed Martin and Tata Advanced Systems. Lockheed Martin, Tata, Tier 1 suppliers and prospective Indian industry partners gathered at the event to discuss partnership opportunities for strengthening India-US defence industrial ties and Make in India partnerships.

Lockheed Martin has been pitching its F-21 aircraft for the Indian Air Force (IAF) requirement of 114 jets. It is among other top contenders in this field vying for the project. The others are Boeing’s F/A-18, Dassault Aviation’s Rafale, the Eurofighter Typhoon, Russian aircraft MiG 35 and Saab’s Gripen.

.#F21 provides unmatched opportunities for Indian companies of all sizes & suppliers across India, to establish business relationships with us & other industry leaders in the US & around the globe, says Kurt G. Knust, Director, @LockheedMartin Aeronautics. #LMSupplierConference pic.twitter.com/ArwHytDHzd

“Our partnership with Indian industry on both the F-21 and S-76D proposals for the Indian Air Force and Indian Navy will put India at the epicenter of the world’s largest defence ecosystem and deliver unmatched sustainment and export opportunities.”

When asked how well would the Brahmos missile and other required weapons be fitted into the F-21 for cross-border strikes, Lall said, “We have a long history of weapons integration. I think this platform has over 130 different types of configuration. Its most versatile with new weapons integration. What kind of weapons capability will depend on the customer.”