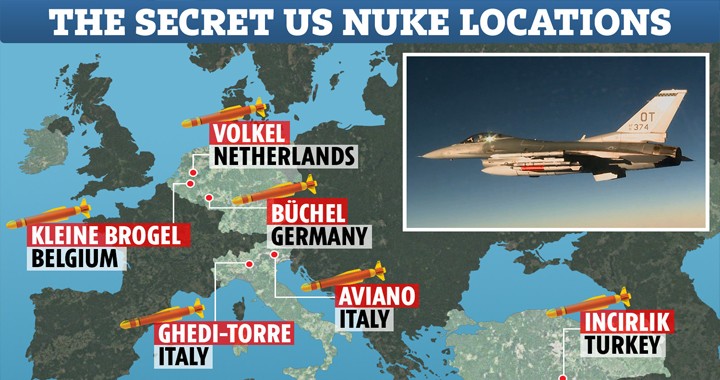 The secret locations of 150 US nuclear weapons stored in Europe has been accidentally revealed in a report published by a Nato committee.

The document, published by the Defence and Security Committee of the Nato Parliamentary Assembly, referred to the sites of roughly 150 American nuclear weapons.

A section on the nuclear arsenal read: “These bombs are stored at six US and European bases — Kleine Brogel in Belgium, Büchel in Germany, Aviano and Ghedi-Torre in Italy, Volkel in The Netherlands, and Incirlik in Turkey.”

The information was included in an early version of the report, titled A New Era for Nuclear Deterrence? Modernisation, Arms Control and Allied Nuclear Forces, which was published in April.

The study was written by a Canadian senator Joseph Day for the Defense and Security Committee of the NATO Parliamentary Assembly.

However, the reference has since been removed from the final version released last week.

The latest version of the report instead makes reference to aircraft capable of carrying nuclear weapons, adding: “The European Allies often cited as operating such aircraft are Belgium, Germany, Italy, The Netherlands, and Turkey.”

The final version of the report has now been published online with specific reference to where bombs are stored deleted.

A Nato spokesman said: “We do not comment on the details of NATO’s nuclear posture. This is not an official NATO document.”

It has been reported that the US has deployed the B61 bomb in Europe.

The presence of US nuclear weapons in Europe is a relic of the Cold War and they were originally stationed to deter Soviet aggression.

At the height of tensions, the US is believed to have deployed 110 nuclear weapons at RAF Lakenheath, which were removed in 2008.

America has indicated it may spend more than £703 billion by the 2040s upgrading its nuclear capabilities.