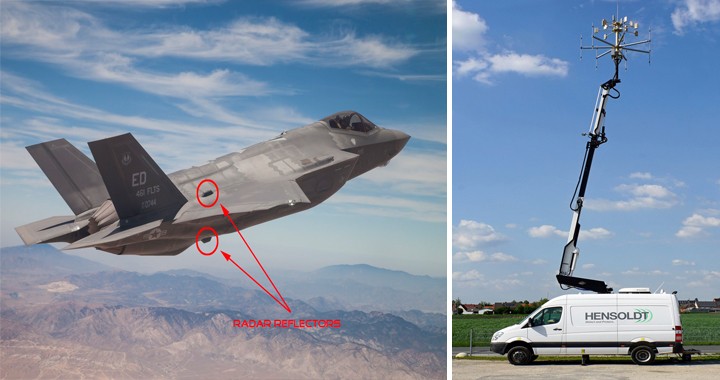 According to C4ISRNet report, German Radar vendor  Hensoldt claims to have tracked two F-35s for 150 kilometers following the 2018 Berlin Air Show in Germany in late April of that year.

The company’s new passive radar system, named TwInvis, is but one of an emerging generation of sensors and processors so sensitive and powerful that it promises to find previously undetectable activities in a given airspace.

Traditional radars broadcast radio waves and then study the waves that reflect off flying objects. This allows the radar operator to gauge information such as an aircraft or missile’s speed, altitude, and direction. Radar can then be used to send fighters to intercept an incoming aircraft or launch surface to air missiles. Stealth aircraft like the American F-35 and Chinese J-20 fighters are carefully shaped to minimize the return a radar will get from the aircraft, greatly reducing its detection range.
TwInvis works by studying electromagnetic emissions in the atmosphere, think radio station signals, TV signals, cell phone tower signals, commercial radars, and so on. The system can detect aircraft moving through this invisible sea of signals by “reading how the signals bounce off airborne objects.”

Hensoldt set up a TwInvis radar system at the air show…but the F-35s never took off. However, the company did also set up one of the radar sets downrange of the airport and caught the planes taking off, tracking them for 150 kilometers (93 miles).

For now, TwInvis is only really useful as an early warning radar, warning defenders of a stealth fighter’s approach.

TwInvis’ radar is not sophisticated enough, at least not yet, to guide radar-guided missiles. But the article notes it could provide enough location data for an infrared-guided missile (like the AIM-9X Sidewinder) to search for a target’s hot engine exhaust.

The technology sounds promising, but there were a number of factors that helped TwInvis detect the F-35s. One, they knew when the F-35s were coming and were able to use the signals from the jets’ ADS-B transponders to help identify the aircraft. In wartime, adversaries will not know the planes are coming and ADS-B emitters will be turned off.

Another issue with the radar is something fundamental to its method of operation: it relies on signals from civilian transmitters to detect stealth aircraft. In many parts of the world, especially over open water or remote regions on land, there won’t be many signals to collect data from. A country with stealth aircraft could disable cell phone networks with cyberattacks and bomb radio broadcasting towers to deny radars like TwInvis a detection medium.

TwInvis could be part of a package of complementary systems designed to help detect stealth aircraft. It is also apparently the only system that can detect the F-35 at 93 miles—it would be a mistake to rule it out just yet. As the radar develops and operators refine their tactics, it could become even more effective.

Stealth aircraft remain far from obsolete. The German aircraft radar imposes costs on the defender, forcing adversaries to buy expensive passive radar systems. It will be a long time before all countries have passive radars. In the duel of stealth versus counter-stealth, TwInvis is a shot off the bow—but the duel is far from over.

Stories about the F-35-vs.-TwInvis matchup had been swirling in the media since Hensoldt set up shop on the tarmac at Berlin’s Schönefeld Airport, its sensor calibrated to track all flying demonstrations by the various aircraft on the flight line. Media reports had billed the system, which comes packed into a van or SUV and boasts a collapsible antenna, as a potential game-changer in aerial defense.

At the same time, F-35 manufacturer Lockheed Martin was still in the race to replace the German Tornado fleet, a strategically important opportunity to sell F-35s to a key European Union member state. The company set up a sizable chalet at the air show, bringing brochures and hats depicting the aircraft together with a German flag.

The Lockheed Martin F-35 Lightning II is a family of single-seat, single-engine, all-weather, stealth, fifth-generation, multirole combat aircraft, designed for ground-attack and air-superiority missions. It is built by Lockheed Martin and many subcontractors, including Northrop Grumman, Pratt & Whitney, and BAE Systems.

The F-35 has three main models: the conventional takeoff and landing F-35A (CTOL), the short take-off and vertical-landing F-35B (STOVL), and the catapult-assisted take-off but arrested recovery, carrier-based F-35C (CATOBAR). The F-35 descends from the Lockheed Martin X-35, the design that was awarded the Joint Strike Fighter (JSF) program over the competing Boeing X-32.