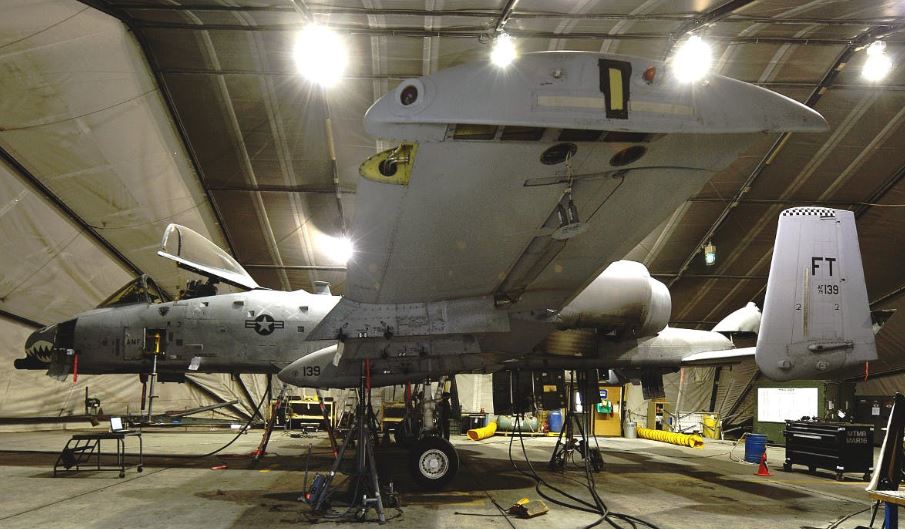 The future of the A-10 has been in doubt in recent years, but the new wings are expected to keep the ground-attack aircraft flying until the late 2030s.

The upgraded wings should last for up to 10,000 flight hours without requiring a depot inspection, AFMC said. And they have an improved, newly designed wire harness to make the wings easier to remove, and lessen the chance of damaging the wing during the removal process.

These aircraft account for about 61 percent of the Air Force’s roughly 282 Warthogs. Boeing received a $1.1 billion contract in 2007 to build replacement wings at its Macon, Georgia, plant, and work began in 2011.

The 571st Aircraft Maintenance Squadron at the Ogden Air Logistics Complex at Hill Air Force Base in Utah handled re-winging for 162 A-10s, the bulk of the project. The final A-10 was also re-winged at Ogden.

Osan Air Base in South Korea replaced the wings for the other 11 aircraft.

AFMC said that upgrading the four-decade-old aircraft proved tricky at times. The Air Force had to pull spare A-10 parts up from the 309th Aerospace Maintenance and Regeneration Group at Davis-Monthan Air Force Base in Arizona, also known as the Boneyard. New parts for the plane’s fuselage also had to be created.

“At the end of the program, making sure we had all the pieces and parts that we needed to make that happen required a really significant team effort,” Stephen Zaiser, director of the 571st, said in the release. “I think the fact that we produced the aircraft so successfully is a testament to the whole team, the special program office, Boeing and others that were a part of making it all work.”

AFMC said that Lt. Col. Ryan Richardson, commander of the 514th Flight Test Squadron and an A-10 test pilot, flew the last A-10 to be re-winged on July 25 and declared it airworthy. That A-10 was from Moody Air Force Base in Georgia.

“It flew great and passed all the [functional check flight] checks,” Richardson said. “It’s unusual to have an airplane in production for as long as this one was and have it come out and fly as well as this one did.”

The A-10 Thunderbolt II, also known as the Warthog, is a twin-engine aircraft that provides close-air support of ground forces and employs a wide variety of conventional munitions including general purpose bombs. The simple, effective and survivable single-seat aircraft can be used against all ground targets, including tanks and other armored vehicles. Boeing is under contract with the Air Force to deliver 173 wing sets through 2017.

Quick Facts About the A-10 Wing Replacement Program