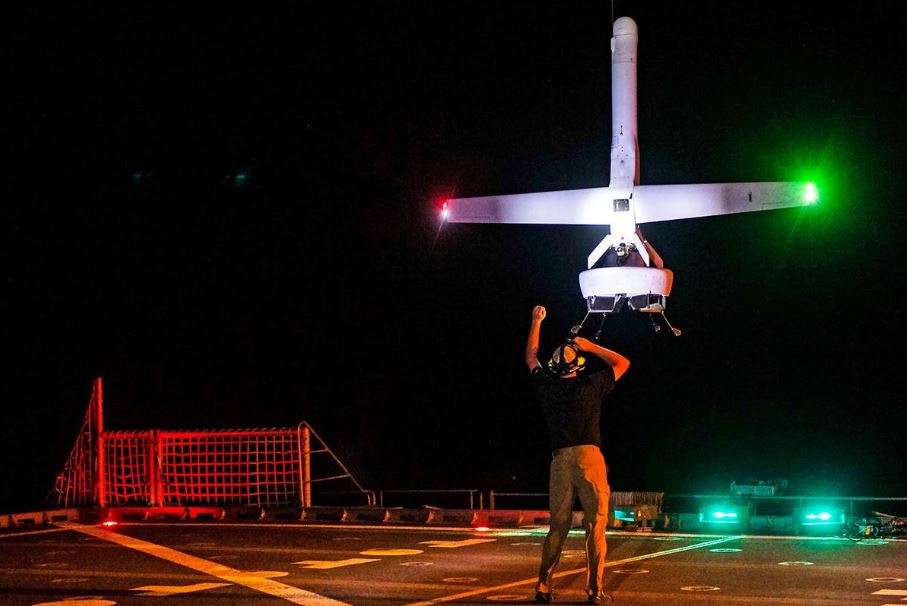 V-Bat can fly at up to 90 knots, stay aloft for eight hours, and take off and land virtually anywhere was once the stuff of science fiction.

V-Bat is capable of infrastructure-independent vertical takeoff and landings while also retaining the high efficiency of a fixed-wing aircraft for long-endurance missions.

Seeing as it can be launched and recovered in a nine square meter area and even in dense urban terrain, as well as on the tight decks of ships, the drone could have a lot of applications in the military, law enforcement/first responder, industrial, and environmental monitoring sectors.

With a speed of up to 90 knots, it can dash to different areas quickly and it can cruise around for eight hours at 45 knots at an altitude of up to 15,000 feet.

It can carry a payload of around eight pounds, which can include various multi-spectral sensor, electronic intelligence, radar, electronic warfare, and communications connectivity packages.

It really is a lot of flexibility packed into a relatively small drone—V-Bat weighs just 82 pounds. It runs on a 183cc two-stroke engine that provides about 13 horsepower to its ducted-fan propulsion and control system.

The 84-pound drone can stay on station for 8-plus hours at 45 knots, has a range of about 350 miles and can fly up to 15,000 feet. It can dash up to 90 knots. The drone is designed to be modular, with different sensors fitting into the nose section of the aircraft, said Heath Niemi, vice president of global sales and development for Martin UAV.

“The payload is in the nose, so it‘s designed to take the payload off, put a newpayload on, so if you need [electro-optical and infrared systems], laser designator, whatever you need,” Niemi said.

The company also lists signals intelligence, short-wave infrared and 4G LTE links among the compatible payloads. The V-Bat, which is easily transportable, could be useful in a search-and-rescue situation, for example, because its vertical take-off and landing, or VTOL, capability.

“If a search-and-rescue helicopter is out there for eight hours looking for somebody, you might as well do this,” he said. “It’s 23 pounds of fuel.” The drone runs 500 watts of power and runs off JP-8 or a gasoline/oil mix. The whole rig comes in two boxes, including the drone, the ground-control station and the telemetry system. The drone can also hand off control to other operators, such as on a ship.

“It’s completely tactical; you can put in the back of a Humvee, a ship — it’s got a small footprint,” Niemi said. “You don’t have any launchers or any other equipment.” The V-Bat will be making an appearance at the Navy and Marine Corps’ massive biennial Bold Alligator exercise. The Army, Navy and Marine Corps have all expressed interest in the UAV.

The U.S. Army has also V-Bat on its very short list of contenders to replace its RQ-7 Shadow drones.