On 8 November, the spokesperson for Armenia’s Defense Ministry, Shushan Stepanyan, has reported that it shot down an Azerbaijani Bayraktar TB2 combat drone.

At the announcement, Shushan Stepanyan said that at around 13:40 Armenian Air Defense units of the Defense Army shot down another enemy Bayraktar TB2 in the southeastern direction in the disputed Nagorno-Karabakh.

The current conflict is the worst the region has seen since the original devastating quarrel in the 1990s.

Despite Russian-mediated ceasefires, unprecedented reports of the destruction of military hardware are emerging from the front line.

Unlike previous conflicts in Nagorno-Karabakh that saw death tolls above 30,000, Azerbaijan has made major advances with significantly fewer casualties.

After capturing a series of villages and strategic bridges, Azerbaijan’s Armed Forces occupied the Nagorno-Karabakh region’s southern border with Iran. 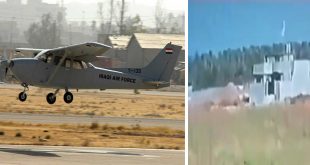 The Cessna of the Iraqi Air Force crashed as a result of a technical malfunction. …