According to the Japanese media outlet, the US military “is believed to be looking into this risk F-35 Software Hack as a probable cause of Japanese F-35A Crash

With a missing Japanese F-35A fighter yet to be tracked down, the US military has suggested that the software of this fifth-generation warplane could be hacked, Nikkei reports.

“There are worries that the F-35A and the F-22 (fighter jet) can be hacked — perhaps during system updates — to plant the seeds for future software problems,” Nikkei noted.

This comes after the newspaper Yomiuri Shimbun cited unnamed Japanese government sources as saying that the US proposed handing the secret codes to the software installed in the F-35 air-frame to control parts, including the engine and the missiles, to Japan.

“The United States has proposed disclosing some of the top-secret details of its state-of-the-art F-35 stealth fighter jet to Japan to encourage joint development of an aircraft that will succeed the Air Self-Defense Force’s F-2 fighter,” the Japanese daily Yomiuri Shimbun reported on April 18. In detail, the U.S. has expressed its willingness to release the software installed in the F-35 to control parts including the aircraft’s engine and the missiles.

Earlier, Japanese Defence Minister Takeshi Iwaya told the Japan Times that “the F-35A is an aeroplane that contains a significant amount of secrets that need to be protected”.

The newspaper also quoted an unnamed Japanese Defence Ministry spokesman as saying that the remains of the missing jet’s tail had been found but that they had yet to track down the rest of the fuselage, as well as the remains of the pilot.

In the latest development, the Japan Agency for Marine-Earth Science and Technology research vessel Kaimei reportedly joined the search for the missing jet. The ship is equipped with echo-sounders and magnetometers, and also carries an unmanned submersible capable of reaching depths of up to 3,000 metres

Related Link: What We Know About JASDF F-35A Crash and Ongoing Search so far

The incident took place during a training flight involving four F-35A fighters; it is the first case of an F-35A crashing, as the warplane, introduced in 2016, has only recently come into service in various countries. 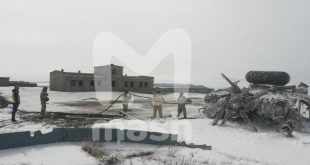